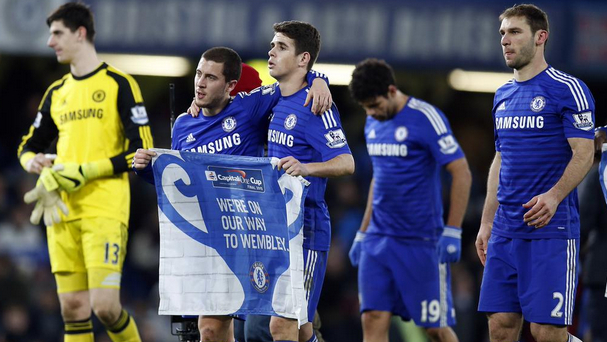 It was a Branislav Ivanovic header in the first half of extra-time that decided this tough and very hard-fought second leg semi-final at Stamford Bridge against a skillful and resurgent Liverpool side.

The Blues are on their way to Wembley for this season’s Capital One Cup final.

It was a different team to that humiliated in the FA Cup against Bradford City last Saturday.

It may well be significant that John Terry was marshaling the defence.

The game had many controversial moments, but a neutral could well argue that aggression was matched by both sides, management tactics could be described as a battle of equals, and in the end the margin of victory was slight.

But this has often been the case in the history of recent titanic cup games between Chelsea and Liverpool.

The Chelsea players and club through its official media Twitter feed wanted to show respect and acknowledgement to the fans.

The #CFC team return to the changing rooms victorious at Stamford Bridge after a long shift! #CFCvLFC https://t.co/BCwcTaXcjs

Here's what Jose Mourinho had to say after tonight's win over Liverpool… http://t.co/66Dm2FrWSx #CFCvLFC #CFC pic.twitter.com/fWRg3HoP8A

Chelsea’s opponents in the first cup final of the season will be either Tottenham or Sheffield United.

Londonmultimedianews.com would obviously prefer an all London derby final so apologies to Sheffield United fans!