The last sighting of Arnis Zalkalns in a south Acton corner shop. The Met Police say he was the murderer of Alice Gross. Image: Met Police

The Crown Prosecution Service has concluded that had Arnis Zalkalns been alive he would have been charged with the abduction and murder of 14 year old Alice Gross.

Alice Gross’s body was found in the River Brent on 30th  September last year having been tied into bags.

Elaborate measures had been taken to keep her body submerged including the use of a bicycle wheel weighed down with bricks.

The bricks tied to a wheel used by Arnis Zalkalns to keep the body of his victim submerged and concealed from police divers.

I have concluded that the evidence now available would have been sufficient to give rise to a realistic prospect of conviction for murder […] There is no eye-witness evidence. The scientific evidence does not link Arnis Zalkalns directly to Alice’s death. Nonetheless the evidence as a whole gives rise to a circumstantial case […] Of all the people the various strands of evidence might have implicated they in fact point towards Arnis Zalkalns: a person who has previously killed, and concealed the body of, a young woman.

I am satisfied that the evidence points firmly to Zalkalns as being responsible for the abduction and murder of Alice. I believed it was important for the CPS to assess the evidence that the investigation team had found against him to reassure Alice’s family and the community, who were so affected by her disappearance.

The circumstantial case against Arnis Zalkalns

The scale of Operation Purple Wave 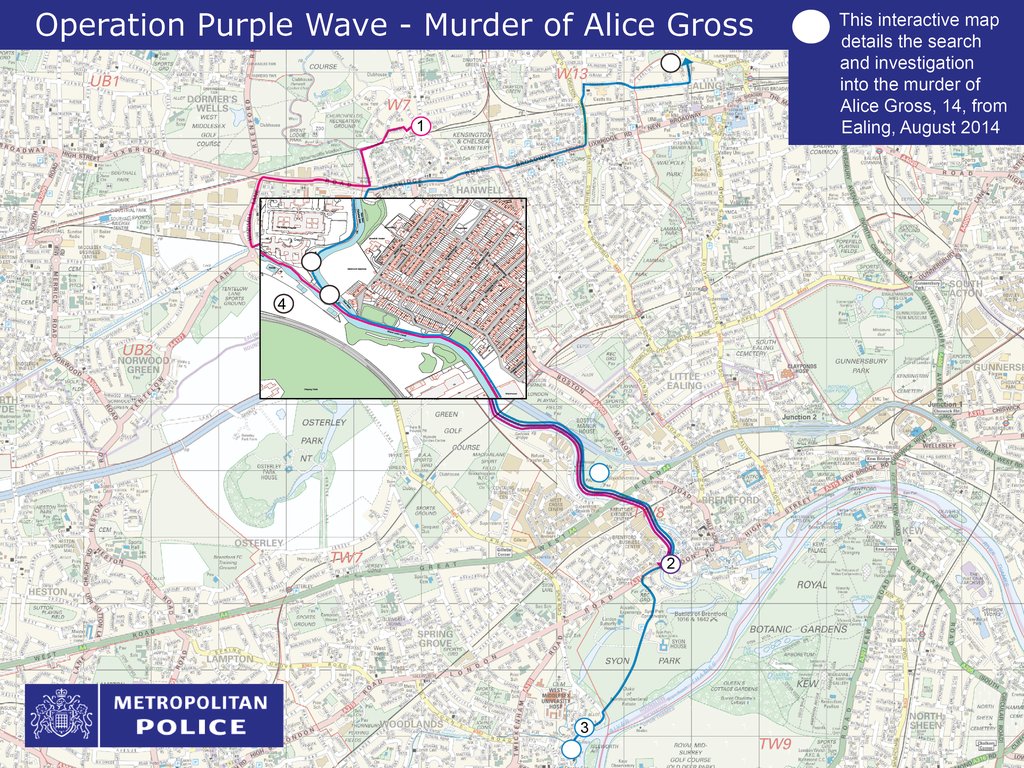 The family of Alice Gross are to be represented at the future inquest by the human rights group Liberty.

Arnis Zalkalns was allowed to enter the UK in 2007, despite having served seven years for murdering his wife Rudite in Latvia.

Alice’s family have serious questions about ‘what the authorities knew or should have known about the man who is believed to have killed our daughter when he came to the UK.’

It remains impossible to describe the pain of losing Alice. Her death has left a hole in our lives that can never be filled. Every day is full of reminders of her life and her loss, and it is hard to imagine a future in which we can find peace or healing. Her brutal murder remains shocking, an appallingly senseless act that is still difficult to believe or understand.

We are confident in the conclusions of the police investigation. Despite the criticism that the police have received in the media, throughout this hideous time we have found they have remained at all times dedicated and sensitive and we would like to thank them for their support and professionalism.

We would like to thank the local community. Hanwell is a multi-cultural and multi-faith area; the search and grief for Alice united the whole community in an extraordinary display of sympathy and compassion, and this has continued. We are very grateful.

We have also been astonished by the continuing support of the public for Alice’s Youth Music Memorial Fund, which we hope will grow, and provide a sustainable legacy of music for disadvantaged children.

The fund has so far raised £17,000, and has been supported by so many individuals, businesses and events. We would like to thank all those who have donated or given up their time to organise collections or put on gigs in tribute to Alice’s memory, particularly those who have organised independent events through the Youth Music ‘give a gig’ scheme.

Our own plans in support of Alice’s fund are ongoing, and we hope to be able to give full details of these in due course. We are planning to hold a music event in the summer as a celebration of Alice’s life and passion for music. We also hope that in time an annual event can be launched to promote opportunities for young musicians, in tribute to Alice’s aspirations.

Although we now have certain information about how Alice died, we are still left with a number of serious unanswered questions about what the authorities knew or should have known about the man who is believed to have killed our daughter when he came to the UK.

Alice believed in the free movement of people and so do we. For her sake we are determined to ask these questions responsibly and sensitively. For that reason we have asked Liberty to help us and we look to the forthcoming inquest into Alice’s death to help us find answers to these questions.

Donations in memory of Alice Gross.