The murder investigation into the stabbing murder of Shaquan Sammy-Plummermale has launched an appeal for witnesses and information.

Last Friday night Police were called to reports of a young man collapsed on the pavement at Berkeley Gardens.

Detectives launch an appeal for witnesses and information into the murder of 17 year old student Victim: Shaquan Sammy-Plummer

17 year old Shaquan Sammy Plummer had received a stab wound to the chest and there are reports that the incident happened after a fight broke out at a nearby house party.

He was taken to the hospital in a critical condition, but died a short while later.

Dr. Konig had to break the news of the student’s death to his mother and gave a moving account to the London Standard of his despair at having to treat the victims of knife injuries .

Another teenager killed by the hand of another on the streets of London.  Another life lost, another family torn apart, another perpetrator set to spend time imprisoned to dwell on their crimes.

No one wins, everyone loses. Many have been blamed for what some believe is an epidemic — the broken families, the schools, the politicians and police — but ultimate responsibility lies with the hand holding the knife.

The person who decides to carry a weapon that they are sadly all too ready to use to resolve a dispute. Enough is enough. It is time to put your knives down. Find another way to argue and to fight, now, before it’s too late.

Friends have paid tribute on social media to the ‘smart, ambitious boy’ from Finsbury Park who was a pupil at LaSwap Sixth Form College in Camden.

Shaquan’s family and friends have released a statement saying:

We are deeply shocked and saddened at the tragic loss of a very much loved son and brother.

Shaquan was a good young man who was doing well at school and was liked and respected by his peers and those who worked with him.

He was popular, caring, good humoured and well mannered. He was devoted to his family and we are proud of what he achieved in his 17 short years.

We ask that the press and all concerned respect the privacy and dignity of the Sammy-Plummer family. It is of deep concern to us that his killer has not been found and we ask anyone who may have any information to contact the police as soon as possible to help them with their enquiries.

We would like to thank everyone who has supported the family at this very difficult time and it is of comfort to know much Shaquan was loved by so many people who knew him at all stages of his life. May he rest in peace.

Detectives have made arrests. They include four 17-year-old youths, and a 46 year old woman, but all have been released on police bail.

Officers from the Homicide and Major Crime Command based at Barking ask that anyone with information that could help them to  the incident room on 020 8345 3775 or call Crimestoppers anonymously on 0800 555 111. 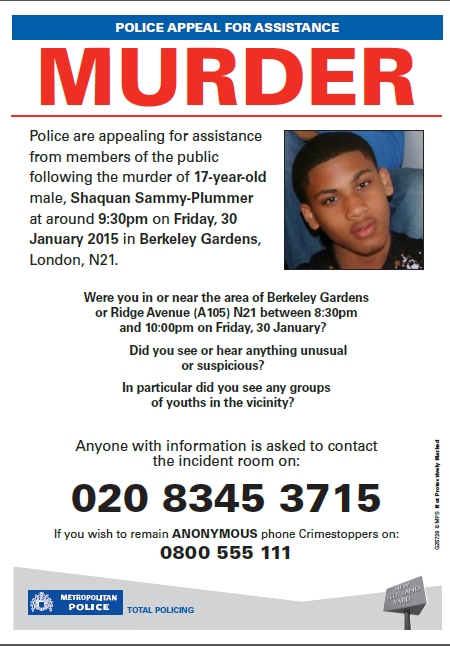