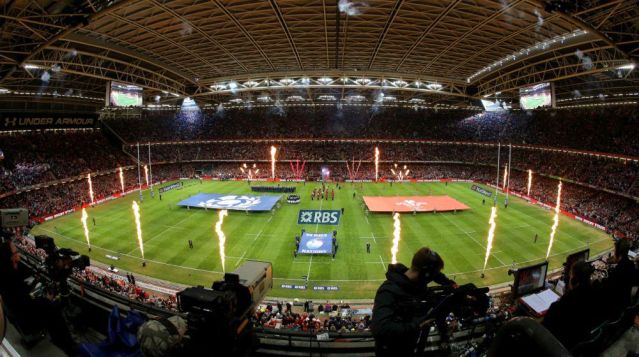 The Six Nations rolls into Cardiff this evening, with the Welsh opening the tournament to their old enemy England under the Friday night lights.

The cauldron of noise and passion that is the Millennium Stadium is a fitting battleground in which to kick off the world’s oldest rugby tournament.

With the weight of 132 years of history, tradition, ecstasy and heartbreak behind it, the ‘grand old tournament’ should provide as thrilling a spectacle as ever.

And that’s without even mentioning the looming shadow of the World Cup.

Ireland are defending champions, and go into the contest as favourites, although England are hot on their heels and are commanding the same 33/1 odds at the bookies.

Have you caught up with the latest videos on the #rbs6nations YouTube channel? http://t.co/zFEa1jije2 pic.twitter.com/pFk4jmO8xq

After a strong, if not perfect Autumn series, Ireland will be boosted by the return of front line players in Sean O’Brien, Conor Murray and Tommy Bowe.

However the opening game away to Italy has come too soon for three of their big guns, namely Cian Healy (hamstring), Jamie Heaslip (shoulder), and commander in chief, Johnny Sexton (concussion).

All three however are set to be available in the coming weeks, with Sexton having been cleared to play earlier in the week following an enforced 12 week lay off due to consecutive concussions.

Italy will bring their trademark physically, and with this being their opening match will look to hit the ground running in front of a home crowd.

Ireland should have too much for the Italians.

However, in front of a home crowd the Italians will not lie down and it may take Ireland 50 or 60 minutes to break them down.

Firstly though, there is the little matter of England v Wales in Cardiff.

England are joint favourites for the tournament outright and have a squad of players who are full of confidence following the recent success of Premiership sides in The Champions Cup.

Following Ben Morgan’s broken leg, the in form Billy Vunipola comes in at No. 8, but injuries to Joe Launchbury, Manu Tuilagi and Courtney Lawes, amongst others will have weakened Lancaster’s hand.

England still retain the potential to steal a win against the Welsh.

Evidence of their intent was on display for all to see this week as Stuart Lancaster had his squad train surrounded by amplifiers blasting Wales’ unofficial rugby anthem Hymns and Arias.

Ever the shrewd operator himself, Welsh coach Warren Gatland, lay down a statement of intent by naming his side on Monday morning.

The Kiwi has made just two changes to the side that beat South Africa in November, with George North and Richard Hibbard returning to the side.

Having won the Grand Slam in 2013, Wales then went on to supply the bulk of the series winning Lions squad coached under Gatland.

They looked a tired team in last year’s tournament.

But this year could see them become title contenders from match one.

With England and Ireland having to go to Cardiff, the Welsh will look to build momentum from the off.

With a furious home crowd and a strong, settled squad Wales will look to exploit England’s inexperience in the second row and midfield and should, all things considered, have just enough to record an opening win.

Scotland, for all their improvement under new coach Vern Cotter, face a tall task in their opening game away to France in Paris.

The Scots will have taken great confidence with the improved form of Edinburgh and Glasgow in domestic competitions, this is mirrored in the decision to hand Glaswegian duo Finn Russell and Mark Bennett their Six Nations debuts.

Alas, the French in Paris would seem a step too far for Cotter’s men, even with the Les Blues’ unpredictable form.

With a backline which includes Wesley Fofana and Mathieu Bastareaud, and a forward pack featuring Thierry Dusautoir, Damien Chouly and Pascal Pape, the French will look to overwhelm the Scots with powerful ball carriers. As always, if the right French team show up, a pasting could be on the cards.