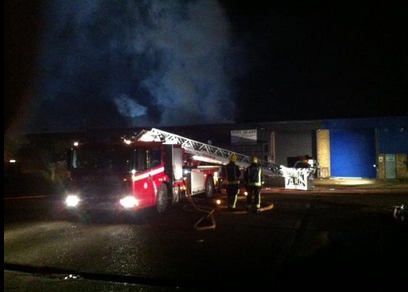 Ten fire engines and around 70 firefighters dealt with a large blaze on the Marsh Way industrial estate in Orwell Close Rainham last night.

There were no reports of any injuries, although the London Ambulance Hazardous Area Response Team was in attendance.

We are currently at a large fire in Rainham . pic.twitter.com/kBX4alebTU

A cordon had to be put in place because of the large number of gas cylinders involved in the fire.

Crews cooled them down as some of the cylinders were in danger of exploding when exposed to the level of heat generated.

The Brigade was first called at 9.06 pm and declared the blaze under control by 3.11 am with damping down afterwards.

An investigation has started into the cause of the fire.