Marlene Dumas ‘The Image as Burden’ at Tate Modern 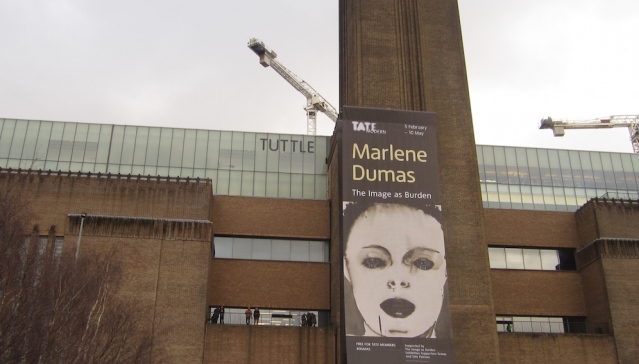 Marlene Dumas grips you as soon as you enter the gallery: panels of her painted faces watch you, and her accompanying quotes force you to engage with what it means to be a viewer, a subject, or an artist.

Dumas was born in Capetown, but she’s lived in the Netherlands for most of her life, claiming, in a characteristically poetic way, ‘South Africa is my content and Holland is my form’.

She’s enjoyed success as a painter since the mid 1980s, and the Tate Modern’s new ‘Image as Burden’ display is one of the most significant exhibitions of her work to be held in Europe.

"Now the female takes the main role. She paints herself." It's #Dumas's time http://t.co/4OAKHrjUu5 pic.twitter.com/YoTzoBPUCF

Many of her portraits are of faces, blown up so that they fill the canvas and leave little room for any background.

Often, there are sickly strokes of green and chalky swirls of pink that give the portraits an ethereal, otherworldly quality. Other faces are painted in spare, ghostly monochrome.

Rather than painting from life, Dumas paints from photographs and media images, and is fascinated by the relationships between representation; between the real face, the painted face and the photographed face.

This exhibition is comprehensive. It includes over 100 of her works, ranging from a crayon drawing of a Miss World competition by 10-year old Marlene, to work that she’s completed in the last couple of years.

As well as the journey through her life as a painter, the exhibition takes interest in the journey of creation, and what gets left behind.

The first piece in the exhibition, for example, is a wall of ‘rejects’ – a collection of portrait heads that Dumas excluded from another series of paintings. She says that she wanted to explore her tendency to destroy what she’s created.

Every room is striking in the way that it forces the viewer to confront gender, sex, race or a combination. Room 12 comes with an explicit content warning, and includes a series of paintings of vaginas and women from behind.

The subjects are solitary: the viewer is invited to be voyeur, and the painted women tantalise and tempt you to spy into a masturbatory scene.

In Room 8 the paintings ‘Young Boy’ and ‘Young Japanese Boy’ demonstrate a skill that Dumas has to suggest something hard and muscular with soft, fluid strokes of paint; the boys’ torsos are at once liquid outlines, melting into their backdrop, and at the same time they have strength and energy, the bones standing out solidly beneath the painted skin.

In the Megamodel/Whore room (room 7) Dumas challenges contemporary characterisations of womanhood; there’s a blue-tinged close up of Amy Winehouse with her trademark swoops of black eyeliner and then, unexpectedly, a relatively naturalistic portrait of Princess Diana.

But the Diana painting is actually half of a work called ‘Great Britain’, and its partner portrait is an almost-naked image of Naomi Campbell, painted in a contrasting, rudimentary style of heavy, dark dashes.

In ‘black drawings’ the wall is tiled with portraits of African faces. Dumas has a curious, compelling way of using minimal lines and shapes yet somehow conveying a real sense of individuality and personality. Each of these faces is deeply different. While most are full of life, one ‘face’ is simply a dark oval, the middle clouded with ink.

Marlene’s fascination with the way that we perceive differences and make divisions weaves throughout her work, and is part of how she thinks about the act of creation. She says that when you put pen to paper and draw the first line, you’re creating separation – you’re carving up space. 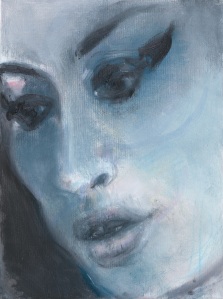 Her words as you enter Room 9 address the fact that women have historically been subjects and muses of art rather than creators. Now, Dumas says, ‘the model becomes the artist. She creates herself’.

One of my favourite paintings of the exhibition follows soon after: the artist’s daughter as a young child is captured in a painting called ‘The Painter’.

The little girl is painted in soft, marbly hues of purples and pinks, but her hands are vividly dipped in dark paint.

She’s gazing at the viewer, in an attitude of childlike unselfconsciousness, but she’s also imbued with the power of a female creator.

The Dumas quotes that accompany the paintings are beautiful and poetic, and indeed she’s published a huge amount of written work over the decades. Even the titles of her paintings are often tiny poems: a painting of a girl from behind, looking back over her shoulder at the viewer, is called ‘Magdalena (a painting needs a wall to object to)’.

Sometimes her art actually incorporates words into the canvas. An early piece from 1977 is called ‘Don’t talk to strangers’.

In this piece, Marlene has ripped out the opening and closing lines of letters that correspondents have sent to her, and pasted them on either side of a large canvas, joining them together with faint seams of paint.

The scraps of the last letter are particularly intriguing: the opening lines refer to bloodstains ‘disappearing’, and the end of the letter is a scribble of angry black and red. In other works, she incorporates clippings from newspapers.

This exhibition feels like a lengthy, dreamlike poem, each room another stanza that extends the argument of the whole.

From a portrait of Osama Bin Laden to self portraits and paintings of her daughter, it’s not the subjects that are being judged in Dumas’s paintings, but the cultural context in which they’re created, recreated and viewed. In a knowing nod to Roland Barthes, one of her pieces is even called ‘Death of the Author’.

Marlene Dumas: The Image as Burden is at the Tate Modern until the 10th May 2015, open daily from 10am until 6pm and until 10pm on Friday and Saturday.