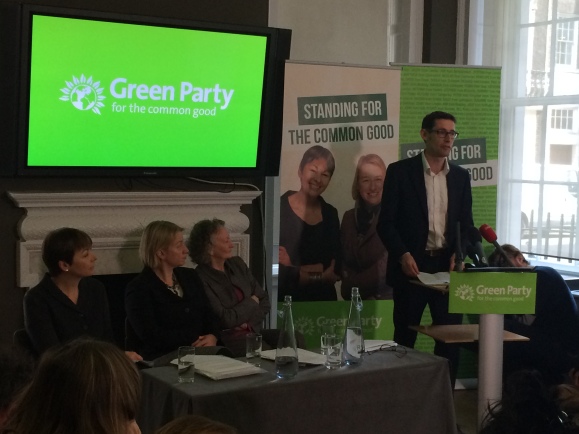 The Green Party has launched its election campaign, calling on people that feel ‘abandoned by politics’ to ‘grasp the opportunity to vote green.’

Natalie Bennett promoted the ‘Green Surge’, as well as the twitter hashtag #GreenSurge, which has seen the London Green Party membership increase in the past few months to 10,000.

She said that these numbers meant it was an ‘exciting time to be part of the Green Part’”, particularly in the capital as the party looked to the future London Assembly and mayoral elections.

She said it was a ‘forward-thinking, visionary place’, which is how the Green Party saw themselves.

The Green Party will be fielding a total of 509 candidates in local elections this year – almost 90% of seats.

Natalie Bennett pointed to the recent rapid increase in party membership that had spurred them to overtake their original 75% target.

She said that ‘business as usual politics’ was no longer possible for the major parties, as the Green Party was offering a ‘bold alternative’ and a ‘real choice to vote for change.’

The main policy areas spoken about at the conference were the environment, education and housing.

Housing is seen as a particular problem for Londoners.

Natalie Bennett made it clear that it was a priority concern for the Greens that people feel secure:

In the charity Shelter’s figures, 11% of households in January weren’t sure if they were going to be able to pay their rent or mortgage. That kind of uncertainty and fear simply can’t continue.

She also made it clear that the Green Party intended to campaign for the scrapping of university fees:

We cannot continue to leave our young people weighed down with a debt that they’re never going to be able to repay.

Caroline Lucas, MP for Brighton Pavilion, put her forward her achievements so far as the sole Green MP in Parliament to prove how smaller parties can make a difference.

She cited her private members’ bills concerning fracking and drilling, as well as the re-privatisation of National Rail.

She made it clear that the Green Party would not consider a coalition with the Conservatives, after ‘what happened to the Lib Dems’ , but would consider working with a minority Labour government on a case-by-case basis.

Darren Hall, prospective parliamentary candidate for Bristol West, believed his chances of getting to Westminster are good:

How is it going? Well, the last time I checked the bookies I’d gone from 100-1 to 7-2, so they think it’s going in the right direction. I’ve even had my first political cartoon drawn of me, and more surreal was a politics student bringing a copy of it for me to autograph.

Natalie Bennett added that this is the ‘most unpredictable election since the Second World War’, with pollsters ‘trembling in their boots’ trying to work out the outcome.

However, during questions from the media, Joey Jones from Sky News asked Natalie Bennett about her ‘excruciating’ interview on LBC with Nick Ferrari earlier that day:

LISTEN: "One of the worst interviews ever by a political leader" by Natalie Bennett on LBC http://t.co/oRhOg4SDO2 pic.twitter.com/DL1pQhoEgh

Jenny Jones was quick to refuse the question.

However, Natalie Bennett chose to answer, agreeing with the assessment of the interviewing and saying it was a case of ‘mind blank’.

@joeyjonessky asks Natalie Bennett of the Greens: Have you let the party down? Here's what happened next: http://t.co/7Bvy8zlDPv

Despite frequent questioning, Jenny Jones made it clear that there would be no discussion of the manifesto.

Natalie Bennett said the full manifesto pledges, along with the financial details, were still being finalised within the internal party democracy.

Journalists asked the Greens if some of their initial pledges made in today’s press conference, such as free education, were expensive goals that would require backing from a clear economic and taxation policy.

Caroline Lucas made it clear that the Green Party has been upfront about its plans to make taxation ‘fairer’ by increasing revenue from big businesses and richer individuals.

Much of the discussion on social media about the Green Party under the hashtag #GreenSurge is concerning Natalie Bennett’s self-confessed poor interview performance earlier today.