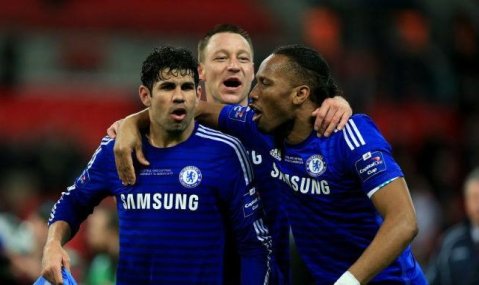 Chelsea have won the first cup competition of the season by beating Spurs two nil at Wembley in the Capital One League Cup Final.

Captain John Terry put the premiership league leaders one goal up in the 45th minute.

Spurs started brighter at the beginning of the second half but on 56 minutes Costa struck in the Tottenham penalty area with his shot being deflected off Walker before going past Lloris for Chelsea’s second.

WATCH: Diego Costa makes it 2-0 to @ChelseaFC. Live on SS1 now. Brought to you by @CapitalOneUK #CapitalOneCupfinal http://t.co/JzEgaz3Fqc

Chelsea supporters were in full song after Costa’s goal before a Wembley crowd of 89,297.

The Football League Capital One Cup twitter feed has been followed throughout the world and they produced a global hot spot graphic to prove it.

In the post match interviews the defeated manager Mauricio Pochettino said his side may have lost in the Wembley final, but they are destined for greater things.

The Chelsea manager Jose Mourinho admitted that it would be difficult to live without winning trophies- something he has made a habit in any country he has worked in.