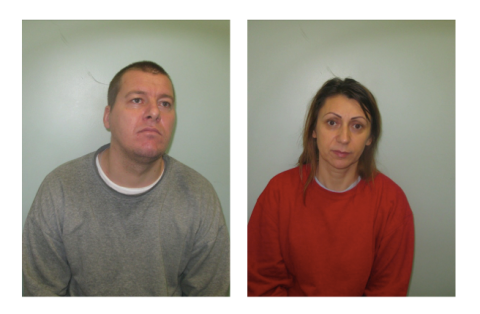 A couple dubbed as a ‘modern day Bonnie and Clyde’ for committing 179 burglaries across the south east have been jailed.

31 year old Ovidiu-Constantin Plamada, and Mariana Sandra, who’s 43, are both Roman nationals living in Ilford, and have each been sentenced to 6 years imprisonment.

The pair pleaded guilty to conspiracy to commit burglary at Basildon Crown Court on Friday 6th of March for offences taking place between May and November of last year.

The indictment included a total of 179 residential burglaries spanning London, Essex and Kent.

You both committed highly organised offending that had a devastating effect on people and violated their homes. You are a modern day Bonnie and Clyde.

They had been arrested in November 2014 as they drove across Dartford Bridge and were found to be in possession of stolen items from two recent burglaries.

When the police searched their home at High Road, Ilford, they found a treasure trove of stolen goods ranging from expensive jewellery to oddities like a victim’s dressing gown and a tin of mackerel.


High Road in Ilford, where the couple lived and stored their stolen property.

Using the latest forensic techniques, the police were able to link the couple to burglaries spanning London, Essex and Kent.

Over 100 of their crimes were committed within the Metropolitan Police District, with items stolen in London valued at more than £400,000.

Detective Sergeant Brett Hagen thanked DC Trevor Guy of the Met Police and DC Steve Cunningham of Essex Police for leading ‘their respective strands of the operation with tenacity and determination.’

He said of the couple:

They were clearly committing burglary for financial gain, but also stole some strange items such as a tin of mackerel, women’s make-up and a duvet set, suggesting they were actually using victim’s personal property to furnish their home and their lifestyles.

The jail sentence today reflects the scale of their offending and will provide them with plenty of time to reflect on the dozens of victims who continue to suffer the effects of having been targeted by thieves.

The overwhelming evidence gathered by these officers has resulted in society being afforded a well earned rest from the activities of two habitual thieves. In addition, as a result of this investigation a large number of victims have been reunited with their property.

This represents a fantastic result for the team and highlights the benefits of Police Constabularies working together to combat serious crime. The effects of becoming a victim of burglary run far deeper than a loss of property. I hope that today’s sentences bring a measure of closure to the vast number of people victimised by these criminals.