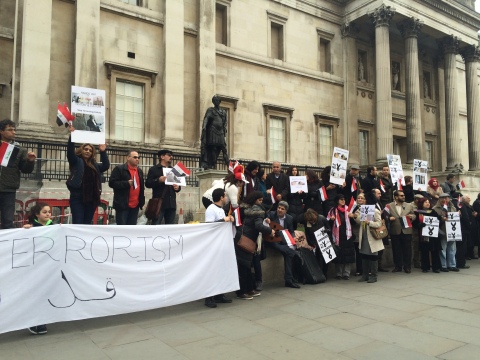 Members of London’s Iraqi community have staged a ‘cultural demonstration’ in Trafalgar Square against the so-called Islamic state, also known as ISIL or ISIS.

They used music, art, poetry and song to denounce the terroristic destruction of Nimrud- the ancient Assyrian city and one of Iraq’s historical treasures.

They held banners outside the National Gallery condemning what they described as a war crime and an attack on human civilisation.

ISIL forces are believed to have demolished many of the city’s artifacts in recent days.

The protesters said they wanted to project a cultural mood that was uplifting and jovial so that the ugliness and evil of Islamic state’s violence and brutality did not dominate how Iraq is represented around the world.

Dr Abdulrahman Dheyhab is the Director of the Iraqi Cultural Centre, the body that organised the demonstration: