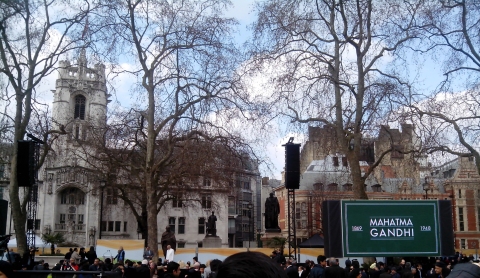 The event marks 100 years since Gandhi returned to India from South Africa to lead the Indian independence movement.

The 9 ft bronze sculpture has been created by Philip Jackson and is inspired by a photo of Gandhi at No 10 Downing Street from 1931.

He was meeting with the then Prime Minister Ramsay MacDonald.

The Gandhi Statue Memorial Trust raised more than £1m to fund the work.

The general public attending the ceremony was not allowed to go near the statue.

But security officers told Londonmultimedianews.com that people will be able to access the statue from this evening.

Only those involved in the ceremony have had access to the statue so far. Image: Taylor Dalton

The event featured a band playing Indian classical music on sitar and Indian flags have been displayed all over the square.

Indian and British flags were displayed all over Parliament Square. Image: Taylor Dalton

Prime Minister David Cameron has talked about the meaning of Mahatma Gandhi’s statue.

This statue is a magnificent tribute to one of the most towering figures in the history of world politics and by putting Mahatma Gandhi in this famous square we are giving him an eternal home in our country.

This statue celebrates the incredibly special friendship between the world’s oldest democracy and its largest, as well as the universal power of Gandhi’s message.

PM: Mahatma Gandhi statue – magnificent tribute to one of the most towering figures in history of world politics #GandhiStatue #GandhiLegacy

Shri Gopalkrishna Gandhi, Mahatma Gandhi’s grandson, has been involved in the ceremony.

How many countries celebrate the life work of a man who opposed it with vehemence for more than three decades? Not many.

Britain does, and Britain celebrates Gandhi today because while oppose it he did, he opposed it in a cause that Britain now sees was just and in a way the world now sees was fair.

He has paid tribute to his grandfather.

And Geeta Alvares Meneses told Londonmultimedianews.com what Mahatma Gandhi’s statue means to her.