Sattelite view of Rusper Road near Ifield Golf Club- where body was found in burnt out car. Image: Google Satellite.

The Sussex police have identified a 26 year old Lewisham man they ‘urgently need to speak to’  in connection with a murder investigation where a body was found in a burning car in Ifield, West Sussex.  [ See Update 17/3/2015 at the end of this posting]

Detectives are looking for Christopher Raymond Jeffrey-Shaw from the Lewisham area and say they ‘need to hear from anyone who knows of his whereabouts or has any information about him.’ 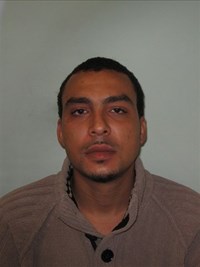 Shortly after 2pm on Friday afternoon  a Volkswagen Jetta car parked close to Ifield Golf Club in Rusper Road, was reported to be on fire.

When fire crews attended, they found a body in the boot of the car, which had suffered extensive fire damage.

A post mortem has revealed the body is that of a woman possibly aged in her 20s.

The cause of death has been given as smoke inhalation.

Officers are still trying to identify who she is.

We need to urgently trace Christopher Jeffrey-Shaw in connection with this murder inquiry.

A young woman has died in horrific circumstances. If anyone has any knowledge of where this man is or may know the identity of the victim, please come forward.

Also we would like to hear from anyone who saw anyone acting suspiciously or the vehicle, a Volkswagen Jetta, in Rusper Road, Ifield on Friday (13 March) between 2pm and 3pm.

Christopher Jeffrey-Shaw is described as 6 feet tall, of stocky build with dark hair, and has a stubbly goatee beard.

A 34-year-old woman from Dulwich, London, who was arrested on suspicion for conspiracy to murder, has been released on bail until 30th March.

Warning from the Police

If you see Christopher Jeffrey-Shaw do not approach him. Phone Sussex police on 101 or email 101@sussex.pnn.police.uk quoting Operation Maderia or contact the independent charity Crimestoppers anonymously on 0800 555111.

Sussex Police say they have arrested a 26 year old man from London on suspicion of murder of a woman in the Ifield murder inquiry.