A £50,000 reward has been offered for any information leading to the arrest and prosecution of anyone responsible for murdering 38 year old Redwan El-Ghaidouni.

He was shot eight times as he sat in the driver’s seat of his parked car on the driveway of his home in Vine Lane, Hillingdon, just before 7 pm on Tuesday February 3rd this year.

He was married with three children.

Detectives are asking for the public’s help in identifying a man who was seen an hour before Redwan was murdered standing on the verge by a telegraph pole at the junction of St Andrews Road and Vine Lane.

This is opposite Redwan’s house.

Police have issued an e-fit of this man in a bid to trace him. 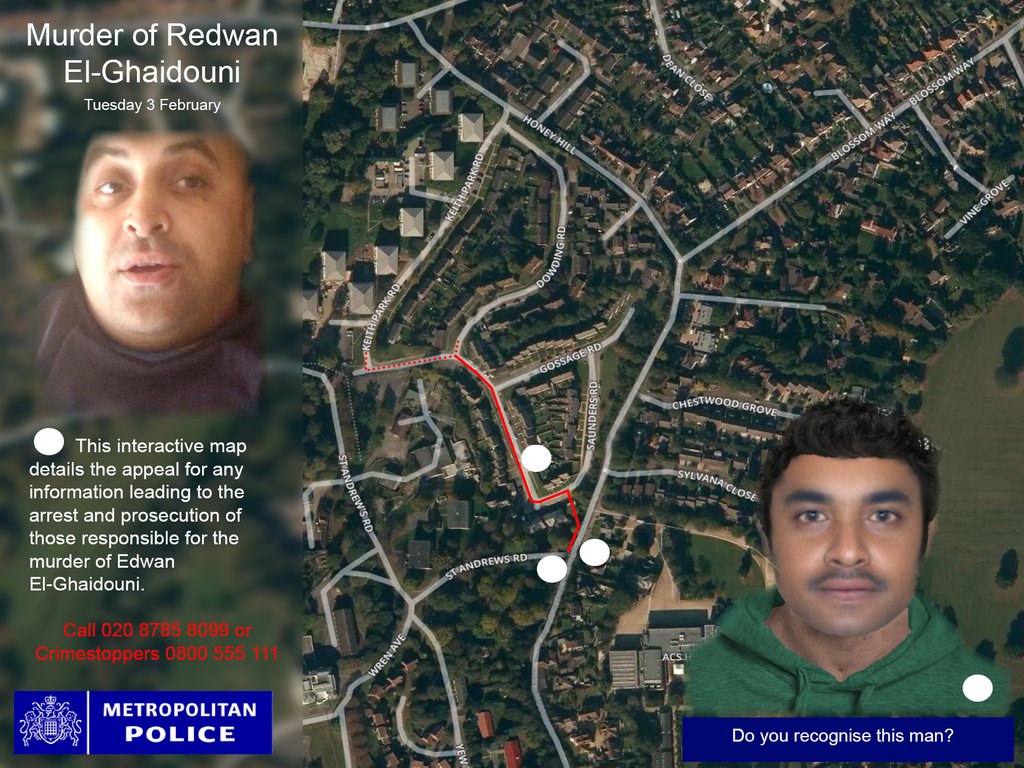 The sighting may be significant as the man in the e-fit was seen standing opposite the alleyway detectives know the gunman used to escape on the day of the murder.

There is a substantial amount of money available as a reward for anyone who has information that leads us to the arrest and prosecution for the man or people responsible for Redwan’s murder.

Redwan was gunned down, almost immediately after he pulled his car into his driveway. This was a very brutal and well-planned murder. It is likely the gunman would have been supported by other people.

We have been examining Redwan’s past and he was linked to criminality and drug importation. I am sure that Redwan’s murder is being widely talked in criminal circles and networks. If you have information about the motive behind the killing, who may have been responsible, or the man who pulled the trigger you can speak to us in complete confidence.

After Redwan pulled into his driveway on that Tuesday night, he was approached by a man who shot him eight times through the car window.

The man was wearing a distinctive dark hooded top, with a large motif on the front, dark bottoms, dark gloves and dark shoes or trainers. He ran off through an alleyway that leads to Saunders Road. He turned the corner where he was caught on one CCTV camera before running in the direction of Dowding Road.

Redwan’s partner and mother of his children, said:

It has been six weeks since Redwan was so brutally taken from us, it feels like a nightmare. The police have been working tirelessly around the clock, but they need your help, for all his family and his children’s sake make that call. We desperately seek the truth and to obtain justice for Redwan.

Do you know the man who is featured in our e-fit? He may be the man who shot Redwan or just someone who was seen in the area at the same time.

This murder took planning and I believe the gunman would have made previous trips to recce Redwan’s street.

Did anyone see the same man hanging round, either on foot or in a car, in the weeks or days leading up to the murder?

If you did, I would urge you to get in touch with my team. Redwan left work on the day he was murdered at around 17:20hrs, normally his journey would take about 30 minutes but on that Tuesday he didn’t get home until just before 19:00hrs.

We are still piecing together what he was doing during the course of that hour. We have traced Redwan to the general area of Hillingdon Hospital at about 18:30hrs but as yet cannot find a reason why.

If you met him that night, saw or spoke to him on the phone then please let us know.