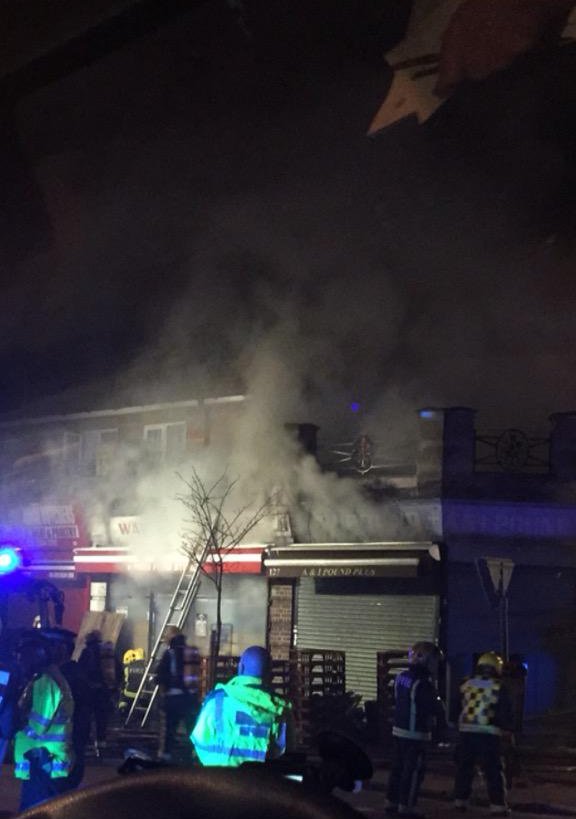 Eleven people, including a baby, have been dramatically rescued from a fire in flats above a shop in Belgrave Road, Ilford this morning.

The London Ambulance Service say seven have been taken to hospital for treatment.

Firefighters had to wear breathing apparatus and use a ladder to reach the first floor to get them out.

Brigade Control officers gave a man vital instructions which he passed on to others in the flats as they waited for crews to arrive.

Station Manager Lee Ware who is at the scene said;

Control officers did a great job keeping them calm and giving them life saving instructions while we arrived. Understandably, they were terrified as smoke was entering the room they were sheltering in. Officers told them to block the door with a blanket to stop the smoke coming in and open a window so they could breathe.

On arrival, crews were faced with a well developed fire which looks as if  it may have been burning in the shop below for some time. Firefighters assisted eleven people from first floor windows via ladders.

Firefighters rescued 11 people including a young baby from flats as shop fire engulfed below http://t.co/PDEXyrgKUB pic.twitter.com/GOETEapL5s

The London Ambulance Service despatched a special unit to the scene with trained medics expert in life saving medical care in hazardous environments- including complex extractions and multiple casualty incidents.

Firefighters are dealing with a fire in a flat fire above a shops on Belgrave Road #Ilford. More to follow. pic.twitter.com/x0a968B5hv

Part of the ground floor shop and a first floor flat was alight.

35 firefighters and officers have been at the scene with 6 engines from Ilford, Dagenham and Barking fire stations.