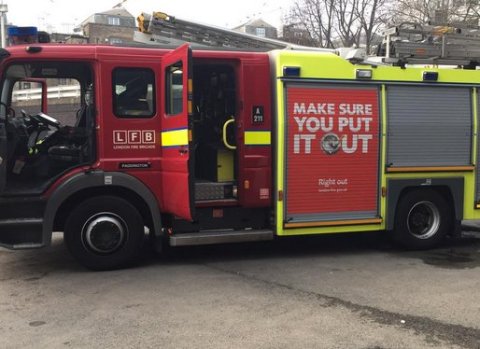 London Firefighters have commended the courage of a member of the public who saved the life of a motorist on the A40 by dragging him from his burning vehicle.

The incident unfolded Tuesday afternoon on the eastbound section of the A40 near Westbourne Grove when a car lost control and caught fire.

@LondonFire Well Done on a good job of getting fire out and nothing coming onto rd below @MPSKenChel @Ldn_Ambulance pic.twitter.com/kHB1q5lozs

Watch Manager Sian Griffiths who was at the scene said:

A man became hypoglycaemic while driving along the A40. His car clipped one car which spun and then rear ended another vehicle and his car burst into flames.

A member of the public saw this happen and dragged him from his car. The driver was unresponsive when he was pulled out and probably owes his life to the good Samaritan who stopped to save him.

Three vehicles were involved in the accident, and although a car was completely destroyed in the blaze, there were only minor injuries.

Three people were treated at the scene by the London Ambulance Service.

Meanwhile, fire crews were called to a car alight in a separate accident on the A40 westbound near Shepherd’s Bush. One person was treated at the scene for shock by the London Ambulance Service.

Three fire engines and 14 firefighters and officers from Paddington and North Kensington fire stations attended the accident at Westbourne Grove.

The Brigade was called to the accident at seven minutes past three in the afternoon  and the incident was under control by 3.52.