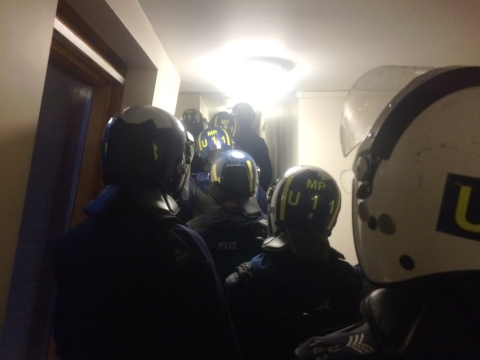 41 people have been arrested in dawn raids throughout south-east London to dismantle criminal networks in one of the largest scale operations ever to be carried out to target ‘serious acquisitive crime’- better known as burglary and theft.

The gangs are suspected of committing more than 300 offences over an 18-month period.

The arrests comprise of 40 men and one woman at 53 addresses in Bexley, Lewisham, Greenwich and Bromley.

The operation is ongoing and searches are continuing at a number of addresses where items seized so far have included drugs and computer tablets.

The coordinated operation has been run by Bexley police, Serious and Organised Crime Command.

Specialist financial investigators intend to use the Proceeds of Crime Act (2002) to strip criminals of any assets they have gained from their illegal activities.

Prior to today, 31 people had been arrested and charged with a total of 41 offences as part of the two-year investigation with 29 convictions for a range of offences.

More than 700 officers from across the Met are out in force to support this operation today, demonstrating our commitment to tackling organised crime in all our neighbourhoods, where ever it occurs in London.

When we identified a rise in burglaries and other acquisitive crime in the Bexley area we set out to identify those responsible who were creating misery to local people whose homes were being burgled and property stolen.

Throughout the investigation we have combined innovative and tenacious policing techniques with good, old fashioned detective work to identify, disrupt and arrest the criminals responsible for bringing misery to local people. This has included targeting handling chains of people who are willing to buy and sell stolen goods, creating a market for this criminal enterprise.

Local people can be reassured that Bexley is an extremely safe place to live and continues to have one of the lowest levels of crime in London.

I’d like to take this opportunity to thank the Bexley dedicated investigation team, Met’s London Crime Squad, Trident, the Criminal Finance Team and Bexley Borough Council for who have worked tirelessly to ensure the success of this operation.

The Leader of the London Borough of Bexley, Councillor Teresa O’Neill said;

We know our residents want to live in a safe environment. They deserve to feel secure in their own homes. Today we have a safer Bexley thanks to excellent police work.

We have been in contact with our police colleagues throughout the planning of this targeted operation. It was a solid intelligence-led plan that spanned a number of months and I am delighted to say that the council played a small part in making this morning’s arrests possible. The impact of such a large and successful operation will be felt across our borough and beyond.

This has been the culmination of a two year operation aimed to dismantle organised criminal networks suspected of committing hundreds of offences including burglary, theft, fraud, motor vehicle crime, drug dealing, money laundering and violent crime.