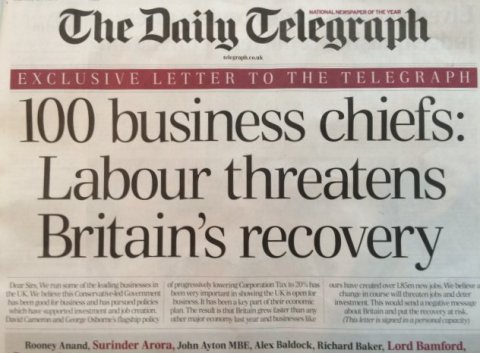 Senior executives back the Conservatives

Over 100 business leaders have written a letter to The Daily Telegraph newspaper praising Conservative business policies and arguing that a Labour government would ‘threaten jobs and deter investment’.

In an additional blow to Ed Miliband’s party, five of the signatories were also figures who have previously supported Labour.

We don’t believe, as David Cameron does, in more tax cuts for the richest in society – the priority is tax cuts for small firms, working people and saving our NHS.

Under our plans dads will be entitled to an extra 4 weeks paternity leave #GE2015 http://t.co/xQFljoXJzc pic.twitter.com/48zx1Z4tmW

Mr Clegg unveiled the policy during a visit to Scotland, where he met parents at a play centre in East Dunbartonshire.

The policy would mean that new dads could take up to six weeks off to care for their newborn, although Mr Clegg emphasised that there would be a time limit attached to the leave – ‘if you don’t use it, you lose it’.

The Lib Dems have been brushing off suggestions that Nick Clegg may lose his seat in Sheffield Hallam in the election, after a poll showed support for his Labour opponent.

Under a Labour government, workers would have a legal right to a regular contract after 12 weeks of working regular hours.

Ed Miliband has been unveiling a Labour policy to bring an end the ‘endemic’ of zero-hour contracts.

Making the announcement at a speech in Huddersfield, Mr Miliband argued that zero-hour contracts are detrimental to family life in the UK.

We have an epidemic of zero-hours contracts in our country – there’s been a 20% increase in the last year alone – undermining hard work, undermining living standards, undermining family life.

The mayor’s speech at the north London concert venue was met with enthusiastic support and he was snapped by dozens of smartphones as he took a walk around the local area.