Candidates return to the campaign trail after last night’s debate

Conservative Party leads in the polls

The Press Association’s poll of the polls puts the Conservative Party in the lead, with 34.4 per cent.

The Labour Party comes a very close second, with 34 per cent.

On the road again

Party leaders were off to a slow start this morning after last night’s TV debate.

David Cameron has visited the Heritage Brook housing development in Chorley, Lancashire to meet with a local couple who used the government’s Help To Buy scheme to purchase their home.

Our Heritage Brook development under the media spotlight during visit by @David_Cameron today pic.twitter.com/RHRu4QDerM

More than 50,000 people have signed up for this scheme, which aims to make homes more affordable by relaxing planning laws for developers and offering loans with smaller down payments.

#HelpToBuy has helped 88,000 families like Rob & Kelly’s to own their own home. We're securing a better future for families across Britain.

Labour leader Ed Miliband has met with supporters in Blackpool, where he commented on the debate.

We're proud to be delivering a tax cut worth £825 to millions of workers #GE2015 http://t.co/O4yNlGyvk3 pic.twitter.com/kk6AhbiuXU

Mr Clegg insists he will not lose his Sheffield Hallam seat to Labour despite a Lord Ashcroft poll indicating he is two points behind the Labour candidate there.

There clearly are some folk in Sheffield, as there are across the country, who either are not happy that the Liberal Democrats entered into a coalition or they are not happy about some of the decisions we have had to take – of course I understand that.

Conservative party officials admitted to taking part in organising the letter that warned that a Labour government would be bad for business.

Over 100 business leaders signed the letter, but three of the signatories have said that it misrepresents them and their companies as Conservative Party supporters.

They are Lord Bilimoria, co-founder of Cobra Beer, Pascal Soriot, chief executive of drug company AstraZeneca, and the new chief executive of Ladbrokes, Jim Mullen, who did not agree with his predecessor, Richard Glynn’s decision to sign the letter.

Mr Glynn’s last day was on 31 March, a day before the letter was published.

Lord Bilimoria, one of the 100 business leaders who signed letter says "I'm not supporting the Tories" – watch http://t.co/1IM4OteH2j

Will there be a Conservative-UKIP alliance?

Labour’s shadow health secretary Andy Burnham urges the prime minister to reveal what his position would be if UKIP held the balance of power in a hung parliament.

The Conservative Party will neither form a pact with UKIP nor work with UKIP in the case of a hung parliament, says Conservative Defence Secretary Michael Fallon.

Mr Farage, however, has not ruled out such an alliance.

He said David Cameron is ‘somebody we can sit down and talk to’.

Nigel Farage has today described David Cameron as "somebody we can sit down and talk to" after the election in event of a hung parliament.

But what about a deal between Labour and the Scottish National Party (SNP)?

We have made it very clear that we are not going to have a coalition with the SNP because we are fighting to win this election.

SNP leader Nicola Sturgeon has, however, considered this as a way to keep the Conservatives out of government.

A matter of simple arithmetic says if the SNP and Labour combined have more seats than the Tories, we lock the Tories out of government. 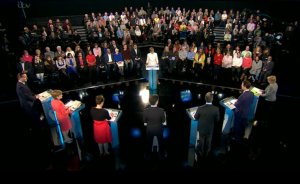 According to ITV, the two-hour programme hosted by Julie Etchingam peaked at 7.4 million viewers. That’s 33 per cent of the audience share.

In 2010, 9.4 million viewers tuned in to see the debate between Mr Cameron, Mr Clegg, and Gordon Brown.

Polls suggest there was no clear winner.

General Election candidates have shared their impressions and reactions after last night.

My impression of the debate is very much there is one person, one leader, one party that is offering the competence of a long-term plan that is working and then there is a kind of coalition of chaos out there that wants more debt, spending and taxes.

I was delighted with the debate. I am glad the poll of polls has got me coming out on top.

He also rejected Labour suggestions that he had been an invisible man during the debate.

Thank you to @ITV for the opportunity to put my case. The UK needs to stick to the plan and not be taken back to square one.

Mr Miliband said this morning in Blackpool that he would leave it to others to judge on how well he had done.

I was pleased I was able to set out the choice at this election and that’s what I’m going to do for the next five weeks – set out the election choice facing the British people, because they are the boss.

They are the people that make this decision and I want to show to them how we can change this country to work for them.

We can build a recovery that goes beyond the City to reach everyone. That’s what I talked about last night, it’s what the election is about.

Mr Miliband has also taken to Twitter his disagreement with Mr Farage’s opinion about treating foreigners with HIV.

I want to say, Nigel Farage's comment about the NHS and HIV was disgusting. He should be ashamed. The fact he isn't says so much.

The only people who don’t realise that are Ed Miliband and David Cameron, they think it’s still a game of pass-the-parcel between the two old parties.

I actually think that most people watching last night will have realised that no-one is going to win this election outright, so it’s all about who is going to work with who.

And of course the Liberal Democrats have shown in the last five years that we can work in coalition to anchor the government in the centre ground to make sure that we act fairly for the whole of the country and that we don’t lurch this way or that.

Really enjoyed that debate but I think we'll be waiting a long time for Miliband to say sorry for crashing our economy. #leadersdebate

Mr Clegg used Twitter in the same way as Mr Miliband to disagree with Mr Farage’s point of view.

And Farage's comments about foreign people with HIV were simply vile and desperate. Politics of the lowest form. #FairerSociety

He told the BBC:

Nigel is not saying that those people should not be treated now. What he is saying is that the National Health Service should not be an international health service.

It is a question of whether we should be having an insurance policy for those people who are travellers, visitors, coming here as students, as happens in over a hundred countries across the world, including places like the United States or Canada. 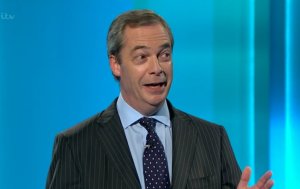 Speaking to the BBC about the debate, Mr Farage said he saw it as ‘UKIP against the political class’.

Ms Sturgeon has told dozens of activists in Corstorphine she had ‘enjoyed’ the clash, but added that she was ‘glad it’s over’.

There is a progressive alternative to the big mainstream parties and I hope that message got across.

Thanks so much for all the good wishes before and since the #leadersdebate. I really enjoyed it. #GE15 #voteSNP

The Green Party leader Natalie Bennett said it was great she could use the debate to raise issues such as climate change.

She also celebrated the gender balance in the debate.

Great that w/@LeanneWood @NicolaSturgeon & @julieetchitv we had gender balance in #leaderdebate platform – hopefully sign of things to come!

And I think that I’ve succeeded in getting the point across that Plaid Cymru is the only party prepared to stand up for Wales.