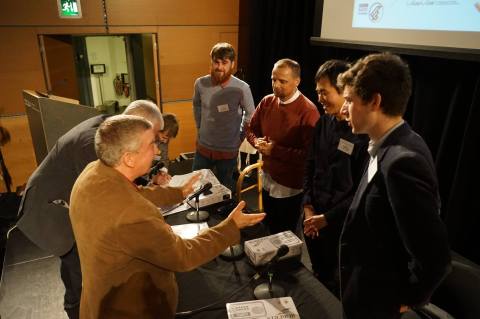 The award is in the name of a pioneer radio documentary and feature maker most notable for his work on the radio ballads with Ewan Mcoll and Peggy Seeger.

Tom Glasser, on this year’s programme and Weidong Lin who graduated last year and is now working for Monocle 24 Radio, travelled to Glasgow’s Centre for Contemporary Arts to attend a day long festival of workshops celebrating sound feature making. 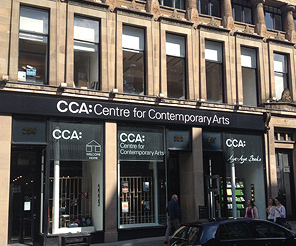 During the Charles Parker Day, Sean Street, Emeritus Professor of Radio at Bournemouth University, introduced the ideas in his new book ‘The Memory of Sound’ which explores the importance of sound and music throughout our lives.

Sound artist Mark Vernon previewed the Centre for Contemporary Art’s own radio station ‘Radiophrenia’ which comes on air in April.

A day of workshops and presentations by creative radio artists, and professional programme makers. Weidong Lin and Tom Glasser on the right. Image: @JaySykesMedia

Tom and Weidong will be getting professional internships, received a digital Roberts radio and their work will be broadcast on national digital radio.

They were interviewed by Charles Parker’s daughter Sara who’s producing and presenting the forthcoming programme on the winners for BBC Radio Four Extra.

Tom and Weidong were recognised for making features that:

in some way reflected an essence of Parker’s own work – for example, story led documentaries bringing to life stories and concerns of ordinary people through creative radio production techniques.

The judges selecting their work for the prizes were: 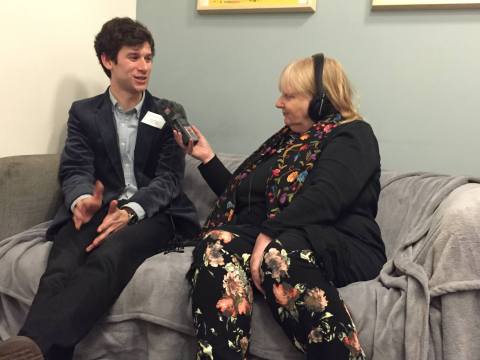 Past MA Radio Winners of the Charles Parker Award