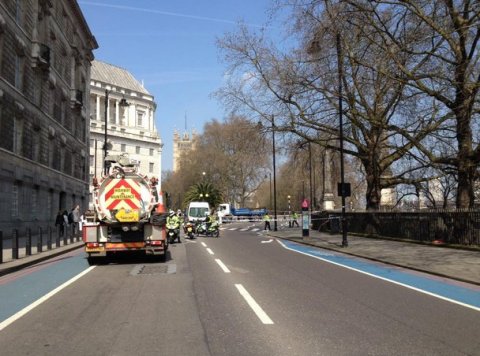 Traffic on Millbank brought to a halt as emergency services deal with death of 55 year old woman cyclist. Image permission of @GorillaFaceLtd

The death of a 55 year old woman cyclist on the Millbank roundabout at the junction of Horseferry Road this morning has sparked outrage from London’s cyclists.

Commuters, motorists and pedestrians who witnessed what happened and its aftermath have been shocked at the vulnerability of cyclists when killed in collisions with heavy goods or construction vehicles.

The anger of cycling safety campaigners has been intensified with reports of the guilty plea of Barry Meyer, the driver of the tipper lorry that crushed cyclist Alan Neve to death in Holborn in 2013.

Meyer pleaded guilty to death by careless driving at Blackfriars Crown Court yesterday and the court heard he had ‘a shocking driving history’ of previous convictions.

The woman victim of today’s crash was the twenty fifth person killed whilst cycling in the UK in 2015.

She was the fifth cyclist killed in London- all in crashes involving an HGV.

All but one of the victims have been women.

The 40-year-old driver of the tipper lorry stopped at the scene. He was not arrested.

Officers believe they know the identity of the woman, but await formal identification. Next of kin have not yet been informed. A post-mortem examination will be held in due course.

Anyone who witnessed the collision is asked to contact the Serious Collision Investigation Unit at Catford on 020 8285 1574.

‘Stop Killing Cyclists’ are planning a ‘vigil and die-in’ at the scene of the fatal crash at Lambeth Bridge, Millbank side, between 6 and 6.30 pm on April 20th. 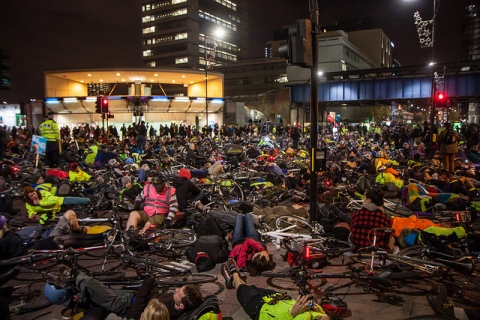 “Cycling die-in protest outside Transport for London headquarters” by Nicolas Chinardet (en:User:Zefrog) – Shared directly by author. Licensed under CC BY 3.0 via Wikimedia Commons

These gatherings serve the purpose of protesting for political action to protect cyclists and honouring the memory of the cyclists who have died.

The last was held in Victoria Street after the death of 36-year old cyclist, Claire Hitier-Abadie, killed after colliding with a construction vehicle on February 19th within a mile of this morning’s tragedy. 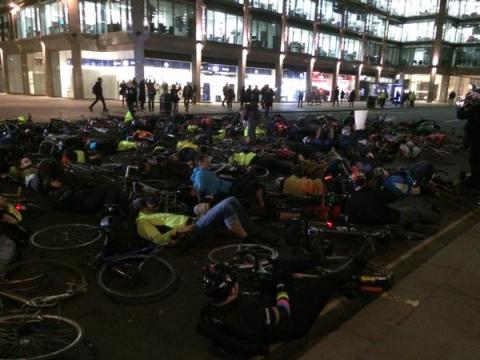 The Millbank roundabout is regarded as a notorious blackspot for cyclists.

A rider was critically injured after a collision there in November 2013.

Rosie Downes, the Campaigns Manager for London Cycling Campaign, said today’s fatality took place at a junction due for redesign – but plans were shelved.

She said: ‘Plans to redesign this junction were abandoned by Transport for London in 2013.’

In an article for the London Cycling Campaign website she said TfL plans to improve the junction were rejected ‘following concerns voiced by Westminster City Council.’

Ms Downes says Tipper trucks have been involved in four out of the five cycling fatalities in London in 2015 so far. In additon to today’s crash they include:

Here is a selection of social media messages on Twitter commenting and reporting on the death of the 55 year old woman cyclist earlier today.

Yet another cyclist killed in London, under yet another tipper truck, this time Millbank. The list goes on @TfL @london_cycling @QMCyclists

cyclist killed at Millbank horseferry junction: A mate and my sis have been knocked off there. SO dangerous

Another cyclist killed by a tipper truck travelling through Central London at rush-hour, this time at Millbank this morning (my commute).

@BBCPolitics @BBCNews a cyclist died at Millbank today. Go cover that, not this nonsense about a pillock

Heart goes out to the family of the cyclist that was killed outside my office in Millbank today. Such a shame

in millbank tower- another cyclist been killed in rush hour. im not sure i can vote for someone so dismissive of such a big killer in area

Absolutely terrible, just seen a woman cyclist killed by a lorry along Millbank. So sad, thoughts with her family. Happens far too often.

Another cyclist tragically killed by an HGV – this time at top of Millbank. Too many lives lost, too little to done to prevent more.

Just walked past what looks to be another cyclist fatality in Millbank, very sad indeed

.@CityWestminster would rather have ppl killed on Millbank than a slightly reduced motor traffic capacity. Appalling pic.twitter.com/7XLYH8c7XS