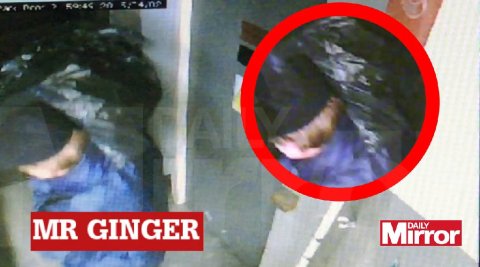 The Daily Mirror newspaper has published images of CCTV footage which it says shows the gang of burglars pulling off the Hatton Garden gems heist.

The Mirror says the gang can be shown making two separate visits over the Easter holiday weekend, and leave on Easter Sunday.

The contents of the safe deposit boxes they have broken into in are concealed in wheelie bins and bags.

They make their getaway in a white van.

The paper has given each individual raider depicted in the CCTV nicknames such as ‘Mr Ginger’, ‘Mr Strong’ and ‘The Gent’.

The Mirror has also revealed that the specialist Hilti DD350 drill used in the burglary may be linked to a burglary four months previously at a building site in nearby Fetter Lane.

The Met Police have not yet made any comment about the footage.

The Met has admitted to being alerted to an intruder alarm going off at twenty minutes past midnight on Good Friday when it would seem the raid had just got underway.

The Met said the call was graded in a way that ‘meant that no police response was deemed to be required.’

The raid in London’s famous diamond and jewellery quarter was not discovered until Tuesday morning.

Detectives have established that 72 safety deposit boxes had been opened, five were vacant and 11 were due to be “drilled out” due to non payment of fees.

56 boxholders are being contacted and estimates of the value of goods stolen vary between a few million pounds to two hundred million.

It’s been described as a well organised and sophisticated crime in which the thieves used a diamond tipped drill to breakthrough two metres of reinforced concrete to access the vault.

They reached the basement using an adjacent life-shaft.