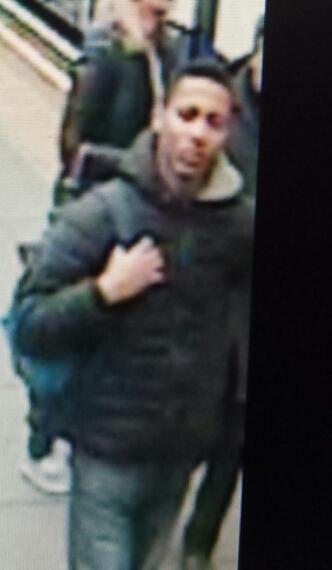 CCTV image of man that British Transport Police would like to speak to in relation to alleged sexual assault on District Line underground train. Image: BTP

British Transport Police have released an image of a man they wish to speak with after a woman was sexually assaulted on board a District line train between Fulham Broadway and Earls Court,

Shortly after the train left West Brompton the victim started to feel a man inappropriately touching her. As the train arrived at Earls Court the man stopped and got off. He was seen by the victim walking towards Earls Court Road.

Officers have released CCTV images of a man they want to trace.

I am keen to speak to the man in the CCTV image as he may hold vital information that could help us in our investigation.

The appeal coincides with the campaign ‘Report it to stop it-Tackling unwanted sexual behaviour on public transport.’

‘Report it to stop it’ film released this week to encourage more people to complain of unlawful sexual approaches and behaviour on the London Transport system. Image: BTP