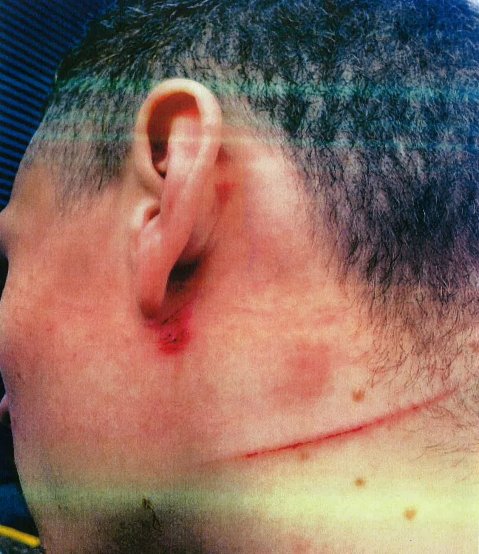 Victim slashed on the neck for challenging insulting and abusive behaviour in front of mothers and children. Image: Met Police

Four men have been jailed for attacking a man in west London after he challenged their intimidating behaviour on a bus.

They set about him when he politely chastised them for their racist and offensive language in front of young children and families.

The victim was punched in the head and slashed on the neck with a knife.

The police say the ‘humble and brave’ victim stood up to the group on the top deck of a rail replacement service bus from Eastcote to Uxbridge town centre last August.

The court heard they’d been using racially offensive language and were swearing loudly in front of passengers of all ages including young children.

The four men followed the victim off the bus and then carried out their attack.

The victim was taken to a west London hospital where he received treatment for a cut to the neck.

He was later discharged and has since made a good recovery.

Detectives at Hillingdon CID retrieved crucial CCTV evidence at the scene which captured the entire attack.

Images of all four suspects were immediately circulated to patrolling officers in Hillingdon on the morning of the assault.

As a result all four men were located and arrested within a matter of hours.

Justice has finally been handed to a brave victim who has shown nothing but humility throughout this investigation. We pay tribute to the strength and courage he shown and thank him for his assistance in providing crucial evidence to our team and the courts about this horrific attack. His defence of his fellow bus passengers and standing up to anti-social behaviour led to an attack which may have resulted in an even more dire outcome.

With immediate effect, officers across the borough of Hillingdon, were working together to locate the suspects from moment that CCTV evidence was seized at the scene. Testimony to their tenacity, each suspect was arrested within hours, proving that there was no where for them to hide.

The other three were jailed on 6th February.