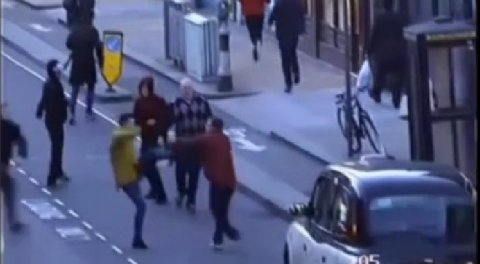 The group was involved in fighting outside a Harrow public house after a Championship match between Queens Park Rangers and Burnley on 1st February 2014.

They received jail sentences of between 30 weeks and one year at Isleworth Crown Court.

Childs, Hutchins and Foreman were found guilty of the offences on 6th March after a trial with Pack previously entering a guilty plea.

The court heard how QPR supporters Childs, Hutchins, Foreman and Pack, gathered outside the Plough and Harrow Public House shortly before 5 pm, where a number of Burnley supporters were having a post-match drink.

Earlier that day the match between QPR and Burnley had ended in a 3-3 draw.

Childs, Hutchins, Foreman and Pack confronted Burnley supporters through the pub windows who shouted back at them.

Moments later violence broke out as Childs kicked and shattered the pub’s window.

A number of people were assaulted and punched outside the pub.

The pub’s manager locked the glass front doors and called 999.

Childs, who was wearing a distinctive red patent jacket, and the other three defendants moved up along Kings Street where they came across further Burnley and QPR supporters.

An inquiry was launched by detectives from Hammersmith and Fulham supported by specialist officers from the Central Football Policing unit.

Hours of CCTV were painstakingly examined in a bid to identify those responsible.

This kind of behaviour is entirely unacceptable to the police, the thousands of law-abiding and genuine football fans, the clubs and the general public. Our hope is that, in light of these convictions and sentences, perpetrators will think very carefully about the consequences of their actions before carrying out football violence.

Our borough has a proud history in policing successful match day operations and we have extensive experience working together with our residents and businesses to ensure that our communities are safe and able to enjoy this great sport.

With continued support from our football clubs and local partners we remain resolute in our zero-tolerance policy towards football related violence and we utterly condemn such actions.

Football violence has reduced over the years but there are still a minority that insist on putting people at risk by fighting in busy streets near members of public. People arrested for football violence do not only get a criminal record but can also receive an order preventing them from attending football matches in the future.

A spokesperson for QPR, said:

The vast majority of QPR fans are excellent ambassadors and passionate supporters. However the club takes a zero tolerance position to violence in or around the stadium and will continue to fully cooperate with the police in these rare instances.

102 football banning orders have been issued between 1st July 2013 and 30th  June 2014 as a result of individuals being convicted for football related violence and public order offences.