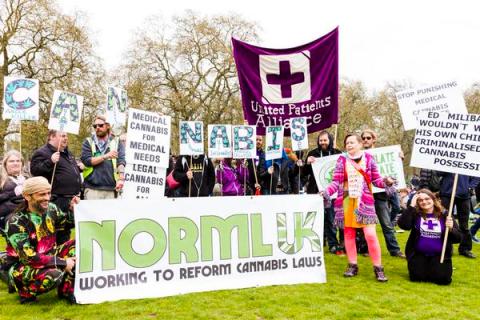 Police made more than 50 arrests in Hyde Park when campaigners to legalize cannabis openly smoked the class B drug.

Several thousand people assembled for the ‘420 Day Celebration’ at Speaker’s Corner to hear speeches for decriminalization.

Red police signs warned that ‘Cannabis Is Illegal’ and uniformed officers moved in to make arrests.

The Met Police say 37 people were dealt with at Hyde Park police station, 10 were given a cannabis warning, six were handed a penalty notice, 21 were given police bail and 16 were taken in to custody.

We need legal access for cannabis and medical access to cannabis especially. […] if you regulated the market to make sure that substances were not sold to children and that it was regulated then that is a better situation, rather than leaving it without control and to anarchy in the black market.

We prefer to look at this as a health issue rather than a criminal issue. We are thinking of how we can reduce the harm rather than saying this is illegal. Drugs is a real issue around the world.

Check out @GrassRootsDocu today for some splendid #420 updates from #hydepark https://t.co/0yNlA0919T