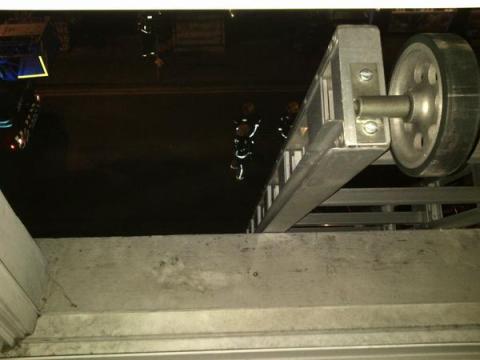 The view of flat occupant and firefighters in rescue using LFB’s longest ladder in Knightsbridge this morning. Image: @LondonFIre

LFB Firefighters have rescued a man from a fire in a flat on the second floor of a building on Beauchamp Place in Knightsbridge in the early hours of this morning using the longest ladder at its disposal.
The man was taken to hospital by the London Ambulance Service suffering from smoke inhalation. 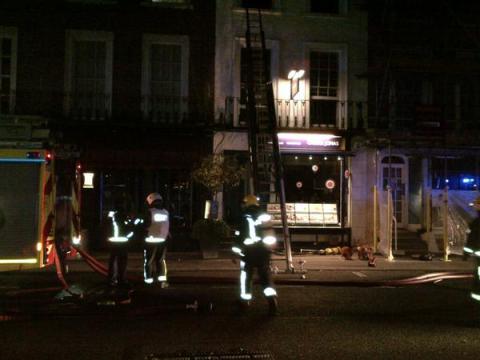 Station Manager Gareth Cook who was at the scene said:

Firefighters used the Brigade’s longest ladder, a 13.5 meter extension ladder to rescue the man from the front window of the flat on the second floor of the building and lower him down safely to the ground. The Brigade was alerted by an automatic fire alarm and were able to act quickly to save the man’s life and bring the fire under control.

Two fire engines and around 12 firefighters and officers from Kensington and Chelsea fire stations attended the incident.

<blockquoteclass=”twitter-tweet” lang=”en”><p>Fire crews have rescued a man from a 2nd floor flat on Beauchamp Place in <a href=”https://twitter.com/hashtag/Brompton?src=hash”>#Brompton</a&gt; using our longest ladder this AM <a href=”http://t.co/eeQUvbQvOJ”>pic.twitter.com/eeQUvbQvOJ</a></p>&mdash; London Fire Brigade (@LondonFire) <a href=”https://twitter.com/LondonFire/status/590342537434550272″>April 21, 2015</a></blockquote> <script asyncsrc=”//platform.twitter.com/widgets.js” charset=”utf-8″></script>
The Brigade was called at 2.07 am and the fire was under control by 2.52 am
The cause of the fire is under investigation.