The hot spring weather enjoyed by Londoners over the last 24 hours has seen LFB firefighters deployed to deal with fires in anything from a Paddington takeaway, Dagenham storage shed, allotments in East Ham, Poplar scrapyard, Abbey Wood grassland, Bexleyhead shopping centre, and a nursing home in Cheam.

A local taxi driver returning home after work spotted a rear storage shed was on fire on Burnside Road in Dagenham and rang the Brigade in the early hours of the morning. (Tuesday 21st April)

When firefighters arrived they discovered the burning shed contained a propane gas cylinder.

A safety cordon was put in place and seven people were evacuated from neighbouring properties while firefighters cooled the cylinder and made it safe.

The shed was completely destroyed by the fire.

Fortunately, no one was injured.

Crew Manager Ian Robinson who was at the scene said:

The shed was well alight when firefighters arrived and the fire could easily have spread to the adjoining house. The taxi driver may have saved the property by raising the alarm. If he hadn’t done so, the outcome could have been much more serious.

Two fire engines and around 10 firefighters and officers from Ilford fire station attended the incident.

Four fire engines and 21 firefighters/officers dealt with a blaze at a takeaway shop with flats above it on Praed Street in Paddington.

Part of the the shop’s ducting – the restaurant’s extraction system – and part of a flat roof at the rear of the building were damaged in the blaze.

Nine people left the building before the Brigade arrived.

Crews are now damping down the take-away fire on Praed Street in #Paddington. Earlier pic of fire from @geoffjein pic.twitter.com/M5XPHiWoIR

The cause of the blaze is not known at this stage.

Five fire engines and 31 firefighters/officers investigated reports of smoke at a shopping centre on Albion Street in Bexleyheath.

Around 400 people were evacuated from the shopping centre by staff before the Brigade arrived and there were no injuries.

Firefighters located and put out a small fire in an exterior expansion joint of the building.

Crews are continuing to investigate the source of smoke at the #Bexleyheath shopping centre: http://t.co/K9ESSIC7di pic.twitter.com/bb0KjUosUg

This is believed to have been caused by a discarded cigarette.

The #Bexleyheath shopping centre has been evacuated. Crews are using thermal image cameras to locate any fire sources pic.twitter.com/FwEz1zzD9A

Four fire engines and 21 firefighters/officers attended a fire at a scrapyard on Ailsa Street in Poplar.

Firefighters led three people to safety from an adjacent warehouse and there were no injuries.

Two portacabins and approximately 20 tonnes of rubbish were damaged in the fire.

Around 35 firefighters were called to a fire at allotments on Folkestone Road in East Ham.

The fire damaged a range of allotments covering around 75 square metres as well as four sheds and a greenhouse.

When firefighters arrived they were faced with quite a large fire and crews have done a great job in hot, challenging conditions to contain the fire to a small number of allotments within, what is quite a large site.

With warmer weather approaching Station Manager Kenny also urged people to help the Brigade reduce the risk of grass fires and fires on open land such as allotments.

Grass fires can cause a great deal of damage to open spaces such as allotments but the public can help by making sure that cigarettes and barbecues are extinguished properly, and that glass bottles are disposed of carefully.

It’s also important that if you do notice a fire on grassland  that you call 999 immediately so we can get firefighters on the scene to tackle it and stop it from spreading any further.

The Brigade was called at 4.01 pm and the fire was under control by 5.20 pm The cause of the fire is not known at this stage.

Firefighters have been called to a grass fire at Bostall Woods on Waterdale Road near Abbey Wood SE2.

At the height of the incident around one hectare of shrub and grassland was alight. 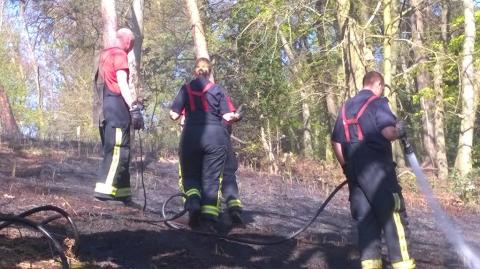 Crews used grass beaters and water backpacks to fight the fire and are now damping down any remaining hot spots to prevent the fire from rekindling.

The cause of the fire is not known at this stage, but with the warmer months approaching the Brigade asked for the public’s help to prevent further grass fires.

Station Manager Gary Thompson who is at the scene said:

This is one of the first grass fires we have attended this year and our crews are working hard to bring it under control. These fires can cause a great deal of damage to open spaces and wildlife but the public can help by making sure that cigarettes and barbecues are extinguished properly, and that glass bottles are disposed of carefully.

It’s also important that if you do notice a fire on open grassland or in woodland that you call 999 as soon as possible so we can get firefighters on the scene to tackle it and stop it from spreading any further.

People can reduce the risk of grass fires and make their summer safer for both themselves and their families by following a few simple rules:

• Don’t leave camp fires or barbecues unattended and extinguish them properly after you have finished using them.
• Clear away bottles, glasses and any broken glass to avoid them magnifying the sun and starting a fire.
• Dispose of cigarettes and matches properly and make sure they are completely extinguished.
• Explain to children the dangers of playing with and lighting fires.

Six fire engines and around 30 firefighters were called to a fire at a nursing home on The Avenue in Cheam, Sutton, SM2, during the early hours of this morning.

fire and evacuation from nursing home in Cheam. Image: @LondonFire

The fire affected the top floor and roof space of the three storey home but thankfully all residents were safely evacuated to neighbouring properties.

Seventeen people were evacuated from the building in total.

When they arrived crews were faced with a serious fire affecting the top floor and roof space of the home. Firefighters worked hard to bring it under control and thankfully the property was safely evacuated.

Crews from Mitcham, New Malden, Wallington, Sutton and Purley fire stations attended the incident, along with an aerial ladder platform from Wimbledon.

Firefighters will remain at the scene damping down the fire.