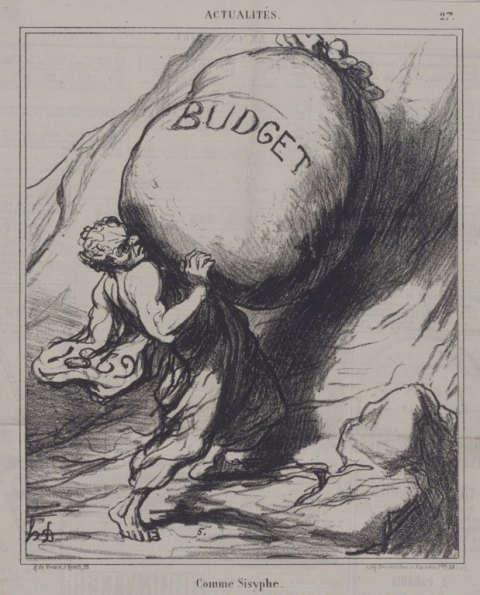 A briefing note published by research body the Institute for Fiscal Studies (IFS) states that the economic plans of Labour, the Conservatives, the Lib Dems and the Scottish National Party (SNP) are missing vital information.

The paper compares the post-election plans of the parties, concluding that the SNP and Labour have a vastly different approach to the Conservatives, but that ‘the electorate is at best armed with only an incomplete picture of what they can expect from any of these four parties.’

The Conservatives have set out the most ambition borrowing-reduction plans, but their proposals to clamp down on tax avoidance and to cut benefits don’t seem to account for how they would deliver their fiscal targets. 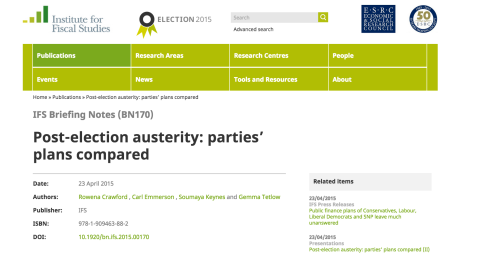 The IFS report is critical of the vagueness of the parties’ economic plans. Image: http://www.ifs.org.uk/

The report notes that the Tories would have to make huge cuts to ‘unprotected’ government departments including defence, transport, law and order, and social care in order to make their sums add up.

Meanwhile, Labour’s budget plans are unclear, with a lack of clarity around how much deficit reduction they want to achieve.

The SNP plans suggest that the party would advocate a slower rate of borrowing reduction.

But the report’s authors argue that Nicola Sturgeon’s party would actually freeze spending for most government departments, and that their ‘stated plans do not necessarily match their anti-austerity rhetoric’.

Liberal Democrat plans are also branded ‘uncertain’. The Lib Dems claim that by the end of the parliament they’d raise £10 billion from measures to reduce tax avoidance and evasion, which is far more than either Labour or the Conservatives believe they would earn from similar measures.

Parties lay into each other over spending plans

In anticipation of the IFS report, the parties tore apart each other’s financial plans.

Ed Miliband claimed that the Conservatives’ planned spending cuts were ‘ideological’, and would be deeper in the next three years than they had been in the last five.

The Tories are committed to extreme spending cuts. And they won't tell you where they'll fall. pic.twitter.com/SQcDNPATcy

But Conservative chancellor George Osborne warned of a ‘deeply unstable’ coalition between Labour and the SNP with a ‘dangerous cocktail’ of more borrowing.

Osborne argued that this would mean higher mortgage rates and taxes and a loss of jobs.

The Lib Dems have published a manifesto with pledges that aim to ‘ensure that disabled people get the support and help they need’.

They set out plans to help disabled people find work, to make sure disability benefit assessments are fair, and to move towards an integrated health service so that ‘people have more control over the care they need’.

More needs to be done to help carers get the support they deserve.

Whilst the Care Act introduced by the Liberal Democrats ensured £400 million was given to the NHS dedicated to helping carers take much-needed breaks, we want to go much further.

Our new £150 million Carer’s Package will ensure society pays back the service that carers give to their loved ones and the community, easing the pressure they are under, and providing the support needed to live happier, more fulfilling lives.