£20,000 reward for Hatton Garden diamond raid gang and CCTV of all six burglars

Head of the Flying Squad, Detective Superintendent Craig Turner, has announced a reward of £20,000 for any information leading to the arrest and conviction of all those responsible for the Hatton Garden safe deposit heist.

He appeared on BBC1 Crimewatch and appealed to witnesses to the raid over the Easter Bank Holiday weekend to come forward.

Further images captured on CCTV of the thieves entering and leaving the scene of the burglary have been issued in an attempt to jog people’s memories.

Detectives have also released an image of the actual drill used to bore through the wall inside the vault. 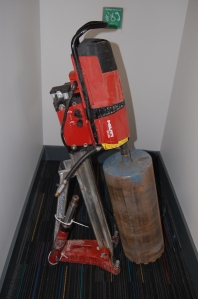 DS Turner said: ‘We know that the thieves initially entered the building after 2100hrs on Thursday, 2 April and left shortly after 0800hrs on Good Friday, 3 April.’

They returned to the scene soon after 2200hrs on Saturday, 4 April and were recorded on CCTV leaving the premises at around 0640hrs on Easter Sunday, 5 April.

He was keen to point out that on both days one suspect makes his way to the side exit of Hatton Garden Safety Deposit Ltd where he lets the other gang members into the building.

We have also released an image of the Hilti DD350 drill that was used in the burglary and we are keen to hear from wives or partners of anyone who has specialist knowledge or skills that use this sort of equipment. Were they away during the Easter Bank Holiday weekend or have they been acting oddly since the burglary was carried out?

The Six Suspects on CCTV

Detectives have drawn up a schedule of movements on CCTV