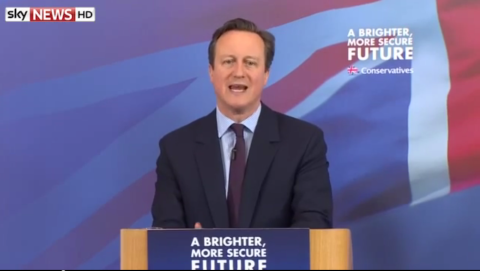 Delivering a speech about foreign policy in London, Ed Miliband has said that David Cameron and other world leaders failed to help post-conflict Libya, contributing to the current migrant crisis.

The Labour party leader attempted to define his party’s ‘outward-looking’ stance in contrast to the coalition government’s ‘isolationist’ foreign policy:

It is time to reject the small-minded isolationism that has characterised this government. It is an approach that has shrunk our influence and weakened Britain. We need a government that is outward looking, not inward looking.

Mr Miliband claimed that the international community had let Libya down in the years that followed Colonel Gaddafi’s fall.

An estimated 900 people are thought to have drowned just outside Libyan waters while attempting to reach European shores last weekend.

David Cameron has hit back, calling the comments about Libya ‘ill-judged’, and Nick Clegg has claimed that Mr Miliband is using tragedy for ‘political point-scoring’.

The Conservative leader has set out plans for ‘English votes for English laws’ so that Scottish MPs are unable to influence rates of English income tax.

English MPs will be unable to vote on the income tax paid by people in Aberdeen and Edinburgh while Scottish MPs are able to vote on the tax you pay in Birmingham or Canterbury or Leeds. It is simply unfair. And with English votes for English laws we will put it right.

Ms Sturgeon said that issues such as the English health service were inaccurately being classified as ‘English-only’ when they would have a ‘direct impact on Scotland’s budget.’

Other parties also criticised the plans, with Labour’s Harriet Harman saying that change should be worked out on a cross-party basis and Lib Dem Brian Paddick claiming that the Tories were ‘playing a dangerous game of ‘them Vs us’ to win votes.’

Chief Secretary to the Treasury Danny Alexander has warned that a minority leadership propped up by the SNP or UKIP could lead to ‘an unstable government.’

The markets themselves are showing a lot of concern about the instability that would arise from a government that was lurching vote-to-vote – on life support, if you like, politically – having to look constantly to Alex Salmond or Nigel Farage, who might at any point pull the plug.

Mr Alexander said that Conservative policies would bring ‘a massive lurch to the right’, and that an unstable government could lead to higher interest rates.

The Liberal Democrats have been working hard to convince voters that they represent the sensible middle ground, and that they have the power to stabilise the government.

The economy need a centred & stable govt – not one which will lurch left or right. http://t.co/8oOMBtXGvG #GE2015 pic.twitter.com/4vIZwO7zDY

During a speech in Aberdeen, Mr Alexander said that the Lib Dems were the only ones that could ‘keep Britain in the centre ground, the markets happy and the recovery going.’

We are the only party that can keep Britain in the centre ground, the markets happy and the recovery going.