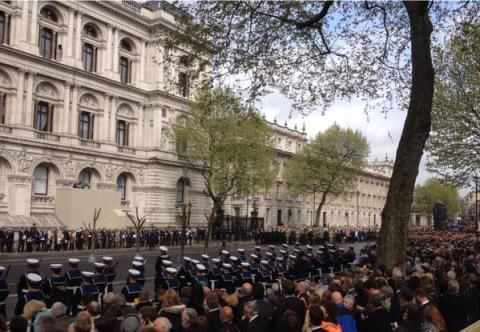 Descendants of veterans and 1,500 military representatives from all nations and units have marched and assembled to remember those who fought and died in the Gallipoli campaign of 1915.

‘The memory of Australian and New Zealand troops who died in the First World War’s Gallipoli campaign will never be forgotten.’

The Anzac (Australian and New Zealand Army Corps) forces who took part in the offensive, which began 100 years ago today, were commemorated at an open-air event held at London’s Wellington Arch.

Sir Lockwood said: ‘We will always remember, be always inspired.’

One hundred years ago this very morning, the young soldiers of the Australian and New Zealand Army Corps began landing on a narrow beach on the Gallipoli Peninsula.

They were part of the Allied invasion of Turkey – the beach would become known as Anzac Cove, their sacrifice would become legend.

The Queen, Duke of Edinburgh and Prince William turn out onto Cenotaph for #Gallipoli100 commemoration. pic.twitter.com/4j2BrnhIzF