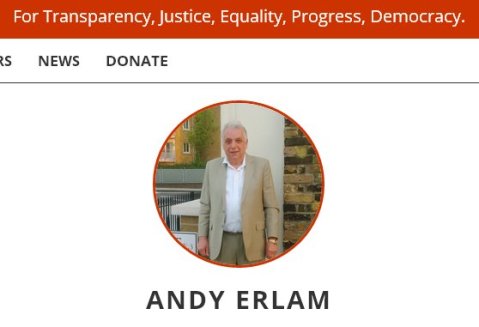 A writer and film-maker Andy Erlam who led the legal fight that had Tower Hamlets Mayor Lutfur Rahman removed and banned is to stand in the new election to be held on June 11th.

Andy Erlam was one of four Tower Hamlets voters who  launched the challenge when neither the Labour Party nor the Metropolitan Police would intervene.

He said he would be standing on ‘The Red Flag Anti-Corruption’ ticket.

Many people have asked me to stand. It’s the chance in our lifetimes to change everything for the better.

If elected I will… end the ‘cult of personality’ at the town hall and investigate and change every aspect of the council with the many good officers who I know have been frustrated and blocked for years.

In the court ruling Mr Erlam was described as a former political adviser who had been a parliamentary candidate in Cheltenham, Gloucestershire, and Bexleyheath, south-east London.

He had also stood for election to Tower Hamlets council on an anti-corruption ticket.