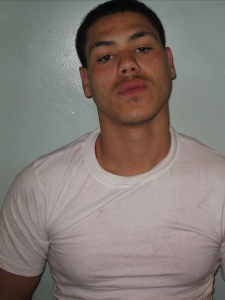 Shakil Ruel McCrea, of Kings Hill Avenue in Hayes, was sentenced at Isleworth Crown Court on Friday 24th April to 14 years imprisonment for three counts of robbery and possessing an imitation firearm.

McCrea and his accomplice were arrested after being identified by two of their victims on Facebook shortly after the incident which occurred at Yeading Brook Park in March 2014.

His accomplice, a 17 year old man also from Hayes, is due to be sentenced for two counts of robbery on 29th May at Kingston Crown Court.

The attack occurred when the pair had approached their victims, two teenage boys, at around 12.05 AM on 20th March 2014 demanding their personal possessions and shouting ‘give me your stuff!’

McCrea and his accomplice then assaulted the boys, using a vodka bottle to strike them over the head.

They stole a mobile phone, headphones, a wallet and its contents, including an inhaler for asthma, before fleeing.

The victims dialed 999 and both received hospital treatment for their injuries.

On 28th March McCrea and an unidentified associate forced their way into a residential address on Hobart Lane, also in Hayes, then threatening two male occupants with a handgun and demanding their mobile phones.

The incident was reported to the police but by the time officers arrived both suspects had fled the scene.

One week later police were called by one of the victims who said he had seen McCrea and his associate close to the crime scene on Hobart Lane.

Officers immediately attended the location and arrested McCrea and a 17 year old male who were later charged with robbery and possession of an imitation firearm.

A search of an address in Hayes also uncovered the stolen phone from Hobart Lane.

As a result of the police working together with victims of crime and securing the best evidence to present before the courts, McCrea will now be beginning a significant jail term for his awful actions.

Our long term commitment to ensuring the public is safe remains resolute, and we will use every tactic and resource available to relentlessly pursue offenders who blight our communities in this way.