05:48 Ealing Central and Acton was considered a key battleground, one of the few score marginals that could settle the election.

But the definitive exit polls at the start of the night robbed this constituency of any national significance, even as the count remained neck and neck right until the end.

Here is the declaration in full:

05:42 There was a large police presence tonight. 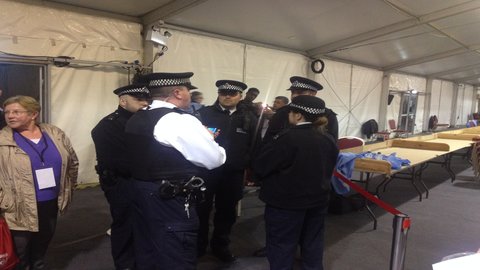 Ready for anything. Image by Robbie MacInnes

05:20 Green candidate Tom Sharman is ‘really pleased’ with the number of people who voted for him. Membership of the Green Party ‘has quadrupled in the last year,’ and this is reflected in Ealing.

05:13 An astonishing 53 people voted for too many candidates.

111 ballot papers were disqualified for uncertainty.

Tammy Rendle of The Above and Beyond Party considered a vote for a her as good as a spoilt ballot.

05:00 In summary, Rupa Huq has become the MP for Ealing Central and Acton, beating Tory candidate Angie Bray by 434 votes.

Dr Huq is only the second MP for this young constituency. A breakdown of the other results in this constituency poll: The Lib Dems received 3,106 votes, almost 10,000 fewer than in 2010. 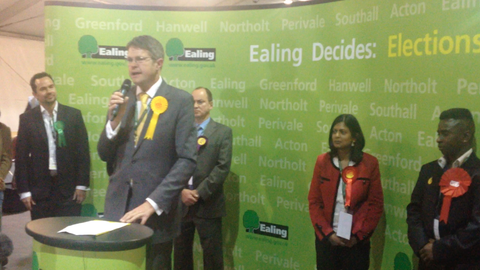 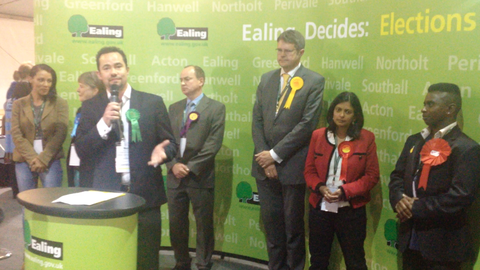 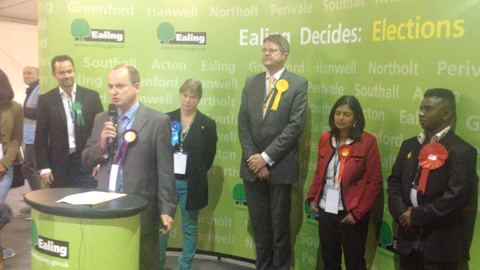 Ms Rendle was less delighted with her 54 votes than the Tories no longer representing Ealing Central and Acton.

Tammy Rendle of The Above and Beyond Party. Image by Robbie MacInnes

Mr Dore was just shy of a tonne with 73 votes. 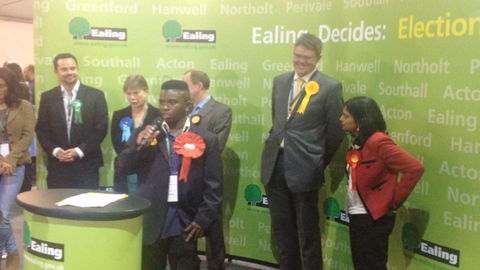 The Acting Returning Officer read out the results. 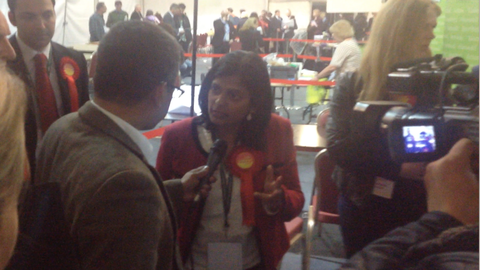 Rupa Huq is mobbed by media and activists. Image by Robbie MacInnes

03:47 With the results in candidates’ speeches contained barbs and pointed looks. Rupa Huq’s victory speech commended her rivals for a tough campaign, in which they ‘fought hard, sometimes literally.’ She said this was a reference to her being ‘manhandled’ by a Tory activist on 3rd May. Angie Bray was grateful for ‘a fair, clean campaign- on the whole’, throwing a swift look over her shoulder.

She’s lost by a few hundred votes. It may well be the case that Labour picked up votes from the collapse in Liberal Democrat support

Dr Huq vowed ‘to make sure that Ealing has a great future.’ 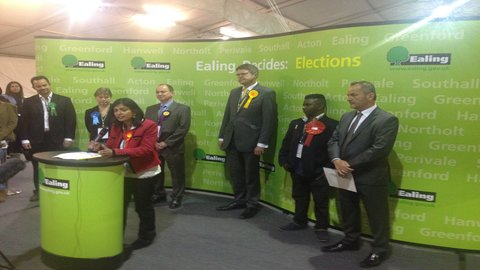 Rupa Huq is “proud and humbled”. Image by Robbie MacInnes

03:34 Ealing Southall results just in: Virenda Sharma for Labour Party has been elected.

03:09 Labour candidate Rupa Huq is elected MP for Ealing Central and Acton with 22,002.

Tom Sharman of the Green Party was pleased with 1,841.

01:39 Anxious faces and nervous smiles after an hour of counting.

Ethereal lighting in the marquee of dreams. Image by Robbie MacInnes

00:57 The count has begun! The Green Party’s Tom Sherman has the scoop.

BREAKING: the actual count has started in #EalingCentralandActon (but no declaration expected until 5am 😧) #GE2015 #ElectionDay

23:55 Independent candidate Jonathan Notley has provided an update on the count so far.

23:11 Ballot boxes are in and the verification process is underway.

The count has been delayed because the boxes didn’t come in as quickly as expected. The declaration is expected around 5 am. 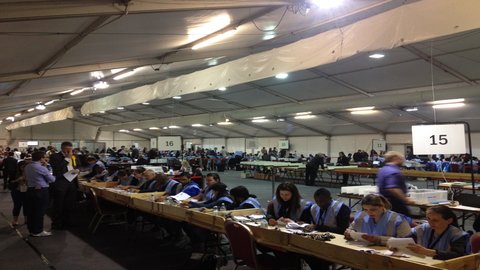 Hello. I’m Robbie MacInnes and I’m your reporter for the election counting in the London constituency of Ealing Central and Acton- currently held by Conservative MP Angie Bray.

Before Ms Bray went into politics she was a radio journalist working for LBC in London and British Forces Broadcasting.

The result of voting here could be a major indication of the fortunes of the Tories and Labour. Labour need to win this marginal to have any chance of ending up as the party with the most seats at Westminster.

If Angie holds onto it- the Tories will be very pleased and confident of the outcome in London and the rest of the country.