Boris Johnson’s victory speech is the perfect mixture of blustering Boris and steely future leader of a party perhaps. Uniting his opponents, charming his detractors, and remembering his wedding anniversary. Marta Malagon was in prime position.

IMG 0217 from Londonmultimedianews on Vimeo.

A huge win for Labour and Jim Fitzpatrick as the first Tower Hamlets result is returned.

The Returning Officer declares that @FitzMP (Lab) has been re-elected as MP for Poplar and Limehouse #GE2015 pic.twitter.com/cjE7vsDcgS

Diane Abbot is re-elected in Hackney South, one of the safest seats in London.

Labour have also gained Enfield North from the Conservatives, who hold Orpington, and gain Sutton & Cheam.

Boris Johnson has won the ultra safe seat of Uxbridge and Ruislip South. Narrowly beating Lord Toby Jug of The Eccentric Party by a mere  22,461 votes. 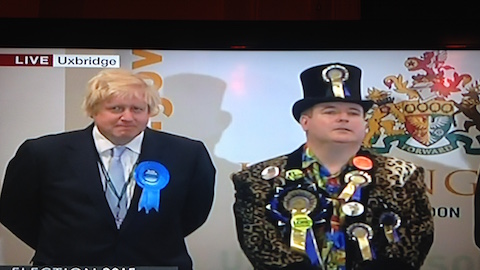 Meanwhile in Twickenham, the decimation of the Lib Dems continues.

Vince Cable is the latest high profile party member to lose his seat to Tania Mathias of the  Conservatives.

We’re really enjoying this interactive map, which is updating things almost as fast as we’re typing. Check it out in the slow moments…

As I type that we’re preparing for Uxbridge result!

Simon Hughes is out! The Lib Dem MP for 32 years has lost his seat to Labour’s Neil Coyle. This is the moment he realised. 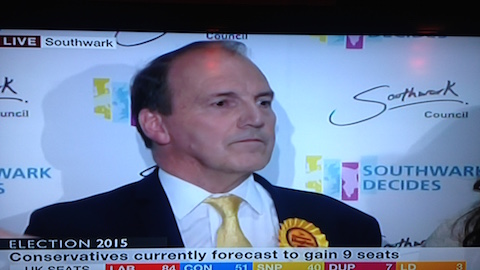 Another massive loss for Lib Dems –  or massive gain for Labour depending on where you stand in Hornsey & Wood Green.

Labour have gained Ilford North from Conservatives – a very tight election campaign resulting in a majority of just under 600.

David Burrowes (pictured, below)  has held Enfield Southgate for the Conservative Party, with 22,624 of the vote. 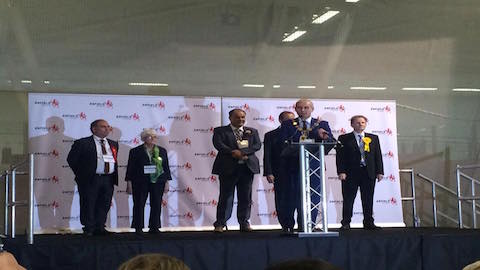 James Berry has won Kingston. A huge blow for the Lib Dems and Ed Davey. A massive result for the Conservatives. So much so we can forgive Ed Davey for giving a speech that would not be out of place at the Oscars.

Another Lib Dem blow in Brent Central. Dawn Butler has won the seat for Labour, defeating Lauren Keith, who held the seat previously.

Labour Candidate Tulip Siddiq (above) is ‘feeling nervous’ in Hampstead & Kilburn. Jacqui Shoen is our reporter there, and is waiting with her for the result.

Boris is back in Uxbridge. Hearts are still a flutter. Marta Malagon is still tracking his every move.

Over in Southwark, Taylor Dalton reports the arrival of a ‘tense looking’ Simon Hughes of the Lib Dems. Contrast this  to Labour’s Neil Coyle (Labour) who our reporter describes as ‘very peppy’ – saying hello, handshakes, hugs and smiles all around. The word amongst seasoned sources is that Labour may take the seat.

Lib Dem sources have told the BBC that Kingston &  Surbiton it could go either way, with a close fight between Ed Davey of the Lib Dems, and Tory party candidate James Berry.

. @LibDems in Kingston & Surbiton concede poll ‘genuinely close’ & neither they or Tories know if @EdwardDaveyMP has held seat #ge2015

There is talk – just talk at this point we must stress – that Ealing Central and Acton is ‘too close to call’ and may be heading for a re-count.

Robbie Mcinnes is on the scene and will update us as soon as he can. Angie Bray currently holds the seat for the Conservatives.

David Burrowes, Conservative MP for Southgate is expected to hold his seat, and is caught off guard looking pretty pleased with everything so far. Rosie Cutler is again told that the result is ‘imminent’.

We saw a cardboard Boris Johnson arriving before. The real thing turned up some moments ago. Marta Malagon was part of the scrum.

The Enfield South result is on its way, Rosie Cutler reports… we’re standing by.

Sadiq Khan’s speech on holding his seat in Tooting. (courtesy: The Guardian)

It’s Battersea’s turn now and Jane Ellison has won the seat for the Conservatives with a majority of almost 8000, with 26,730 votes.

It looks like the Lib Dems will have their deposit returned to them on this occasion. Some small cheer for the party.

Winning  Sadiq Kahn thanked all the staff, and other candidates for their efforts through the campaign. Twitter is reacting well to his words.

Sadiq Khan statesmanlike in his speech: thanks fellow candidates & their supporters..says politics a hard graft, and they deserve thanks.

00:57   The first London result is in! The Conservatives have held Putney. Justine Greening has returned with 23,018, over half of the vote. Wandsworth council have tweeted that  two thirds turned out to vote.

00:40   More tales of good cheer amongst the press contingent – this time from our reporter Rosie Cutler at the count for Enfield North.

lovely spirit at #enfieldcount – it became one of the counter’s birthday at midnight and the whole hall clapped #BritainDecides — Rosie Cutler (@rosie_cutler) May 7, 2015

Bethnal Green and Bow was the very last place in 2010 to declare – the process is well underway now, with just under half of the boxes of votes verified. No final results are expected before 6 am.

We met a happy policeman, and a labour councillor at the gates of Our Lady and Catherine of Siena Church, Bow Road, this afternoon. Rushanara Ali won in 2010 for Labour. 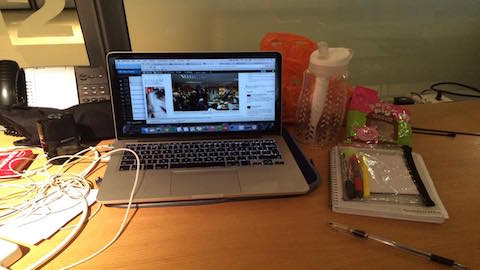 A lull in proceedings, but real camaraderie being shown to our LMMN reporters by some of their fellow members of the press corps.

The confectionery you see in the right of the picture was handed to our reporter Taylor Dalton by members of BBC 5 live’s ‘Up All Night’ team. Everyone is prepared for a long night. Southwark, a Lib Dem seat in 2010, is expected at 3 am.

Lord Toby Jug of The Eccentric Party has arrived at Uxbridge. With a lifesize cardboard cut out of Boris Johnson.

That’s the closest Marta Malagon has come to seeing the Mayor Of London so far. 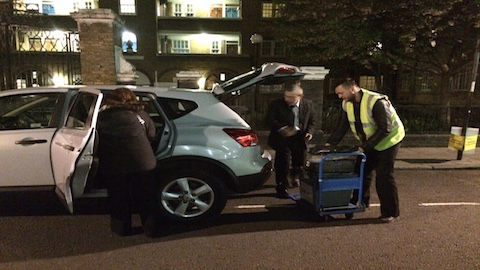 The count has arrived for Hampstead & Kilburn, where Simon Marcus (Conservative), Tulip Siddiq (Labour) and five other candidates are contesting the seat vacated by outgoing MP Glenda Jackson.

The count is not expected until 5 am. Reporter Jaqueline Shoen has found a comfortable chair and will keep us updated. 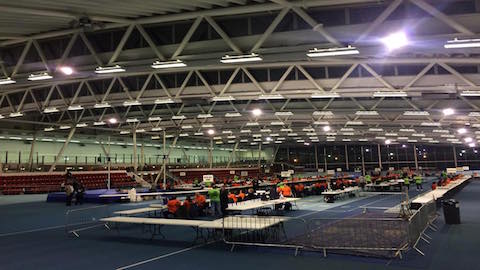 The view right now at the Lee Valley Athletics Centre, where the declaration for Enfield North is expected at 3:30 am.

The seat is currently a Conservative held marginal seat, which Nick DeBois won from Labour’s Joan Ryan in 2010, but with only a 1,692 majority.

We have Rosie Cutler watching this seat closely. It could end up with a very close sprint finish 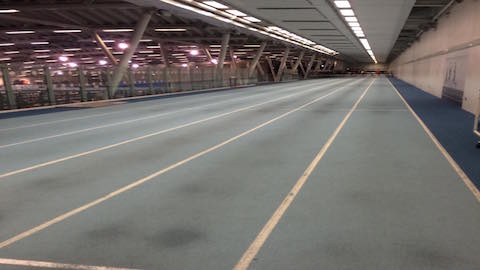 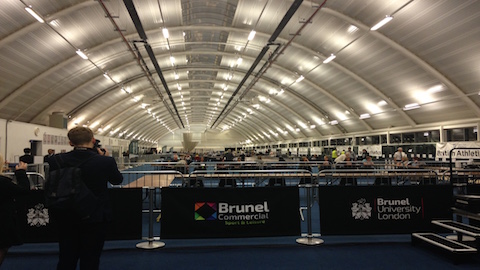 The count is taking place at Brunel University.

The count is underway for Uxbridge and South Ruislip at Brunel University.

Boris Johnson is expected to take this safe Tory seat, but the constituency is not expected to declare until 6am.

Reporters David Waters and Marta Malagon are in position. With coffee.

A small number of voters in Hackney only received their polling cards this morning – too late to register to vote.

Both Hackney South & Shoreditch with Meg Hillier, and Hackney North & Stoke Newington with Diane Abbott, are traditionally safe Labour seats. The results are not expected here until 4am.

The exit poll is in and it is predicting the Conservatives will be the largest party, but short of a majority.

We will be concentrating on the results around London. National news will be analysed by my colleague Joel Grove here.

Hello, I’m Tayo Popoola and I’ll be reporting on what happens regionally in Greater London during results night and early morning 7/8th May 2015.

The results in London are critical to the outcome.

No other city in the UK has 73 parliamentary constituencies.

At present, 38 of the seats are held by Labour MPs, 28 by Conservative MPs, and seven by the Liberal Democrats.

It may well be what happens to the Tory Party’s coalition partner’s MPs that will make the biggest difference, though there are also Conservative-Labour marginals. 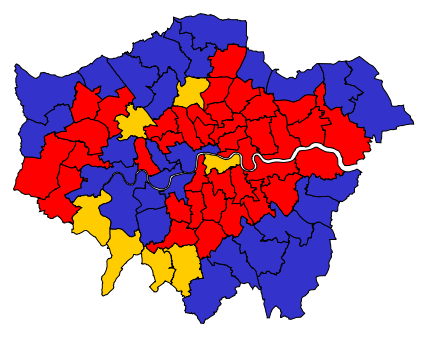 The party political colour map of Greater London constituencies after 2010. How different will it be for 2015? Blue for Tory, Orange for LibDem and Red for Labour.