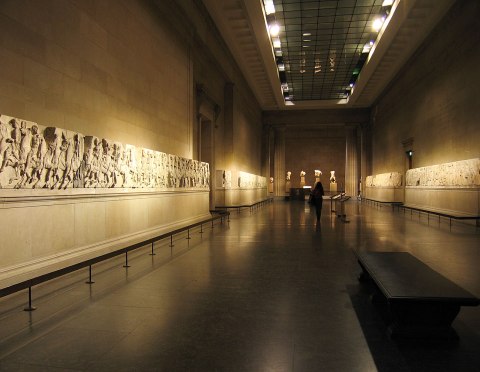 Greece will not be litigating in international law to secure the return to Athens of the Elgin Marble Sculptures.

They’re currently on display at The British Museum in London.

The Greek government has decided they will continue their 30 year political and diplomatic campaign to achieve their return.

The sculptures have been on display in Britain since 1807 and Greece insists the sculptures were taken illegally.

The marbles were carved more than 2,500 years ago in the Parthenon that sits on the Acropolis Hill overlooking Athens.

Greece’s Culture Minister, Nikos Xydakis,  said the country would pursue a ‘diplomatic and political,’ approach to retrieving the sculptures instead.

The country rejected the advice of barrister Amal Clooney, who has continually urged Greece to take Britain to the International Criminal Court.

Mrs Clooney reportedly submitted a 150-page report to the Greek government this week.

The report urged a formal request to Britain to return the marbles, followed by action at the International Criminal Court if it refused.

One cannot go to court over whatever issue. Besides, in international courts the outcome is uncertain. I believe the right attitude for the future of the Marbles is slowly changing and would favour Greece in a diplomatic approach.

The British Museum turned down a proposal by UNESCO, the UN Cultural Agency, to mediate in the dispute.

Mr Xydakis was outraged by The British Museum’s refusal:

We deplore the categorical refusal by the British of Unesco’s invitation to launch a mediation process over the Parthenon sculptures housed in the British Museum. British negativism is overwhelming, along with its lack of respect for the role of mediators.

At the end of last year the museum loaned one of the marbles for the first time to Russia for display in St Petersburg’s State Hermitage Museum.

The Greek Prime Minister at the time, Antonis Samaras, said the museum’s decision was ‘an affront’ to the Greek people.

People have taken to twitter to air their own views over what should be done with the Elgin Marbles:

Hey Britain give back what's rightfully ours!! #ElginMarbles #Greece

We all know #ElginMarbles are Greek; with Greece in need of cash, surely now is the time for UK to buy them and finally settle this?

To whom it may concern, please give the Elgin Marbles back to Greece #ElginMarbles