Appeal for man in connection with Machete attack in Wembley 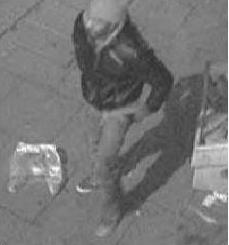 Police would like to speak to this man in connection with machete assault in Wembley. Image: Met Police

Police in Brent have released a CCTV image of a man they would like to speak to in connection with an investigation into a serious assault in Craven Park Road, Wembley.

On Sunday, 22nd of March just after midnight, police were called to reports that a man had been attacked by another man with a machete.

Police came across two men, aged 34 and 47, who’d sustained cuts to their faces.

Both were taken to hospital where they were treated for their injuries.

The suspect is described as a black male, skinny build and 6 feet tall. He was also wearing blue, swimming style goggles.

Anyone with information should contact DC Russ Ellis at Brent Police on 101, or call Crimestoppers anonymously on 0800 555 111.