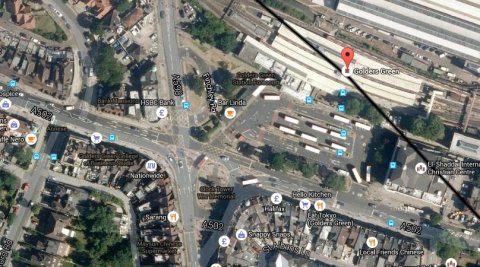 The Met Police Roads and Transport Policing Command is appealing for information and witnesses to come forward after a woman was left in a critical condition following a collision with a bus near Golders Green underground station.

Emergency services received reports of a woman in collision with a bus in the Finchley Road at around 11.52 last night.

Officers, London Ambulance Service and London Fire Brigade attended and found a woman aged in her twenties trapped beneath the bus.

The woman was recovered from underneath the bus and taken to a central London hospital where she remains in a critical condition.

The driver of the bus has been spoken to by officers and is assisting them with their enquiries.

No arrests have been made.

Officers from the Serious Collision Investigation Unit based at Alperton Traffic Garage are investigating and are urging witnesses and anyone with information concerning the incident to call 0208-991-9555 or Crimestoppers anonymously on 0800-555-111.

This is a serious collision that happened on a busy road, near a well used station. There would have been a lot of people passing by. It is very important we find out exactly how this incident occurred. I would urge anyone who witnessed the collision to contact us as soon as possible.