Just after 4 pm today, the London Fire Brigade were called to a huge warehouse fire in Charlton in south east London.

Over 70 firefighters and ten fire engines arrived on the scene to fight the blaze. 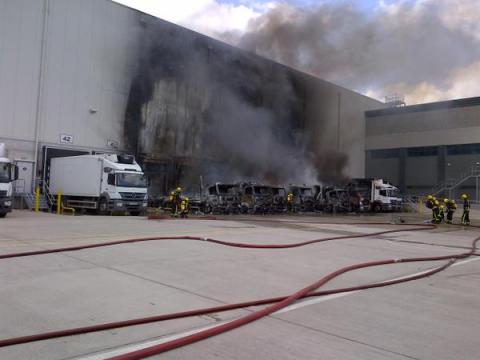 LFB crews tackling Charlton warehouse blaze that could be seen as far as Twickenham. Image: @LondonFire

Surrounding buildings were evacuated and those in the area were told to keep doors and windows closed.

At its height, the fire, which also affected six lorries, produced plumes of smoke which could be seen for miles around.

London City Airport tweeted during the incident to confirm that the blaze was not impacting on flights though the smoke could certainly be seen by aircraft landing and departing.

The fire damaged six lorries and part of the warehouse and four people were assessed on the scene for smoke inhalation by London Ambulance Service.

People from all over London posted photos of the smoke on social media.

RT @LondonFire: The warehouse fire in #Charlton can be seen from miles away. If you're near please close doors & windows © @elmlean http://&#8230;

Station Manager Bruce Grain who was on the scene said:

During its early stages this was a very intense fire. Crews wearing breathing apparatus attacked it extremely quickly and thanks to their efforts the fire was prevented from spreading any further into the warehouse and causing even more damage.

The distribution centre was fitted with a sprinkler system which activated and this also helped reduce the impact of the blaze on the main building.

The cause of the fire is currently unknown.

The fire brigade eventually tweeted that they had the blaze under control and the smoke was dying down.

The London Ambulance Service confirmed they have treated four patients for the effects of smoke.

Another LFB picture from early stages of #Charlton fire. Cause of the fire not yet known london-fire.gov.uk/LatestIncident… http://t.co/VYeX392Lyo

#Charlton: Two patients with breathing problems after inhaling smoke are being assessed by our ambulance crews | @LondonFire @MPSGreenwich

We have attended a fire in charlton with @LondonFire http://t.co/MV3g7VU56R

The fire at the #Charlton warehouse is now under control. Full story here: london-fire.gov.uk/LatestIncident… #Allinadayswork http://t.co/7McxXOf8fT