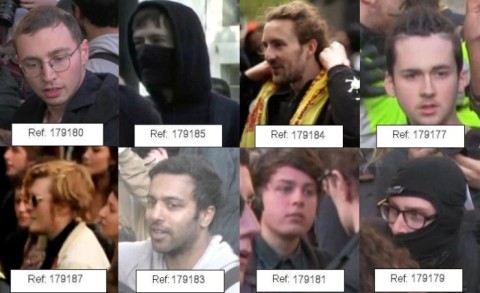 Images of people the Met Police would like to speak to in relation to events outside Downing Street Saturday 9th May 2015. Image: Met Police

The Met Police have issued another set of images of people they would like to talk to in relation to violent disorder in Whitehall on Saturday 9th May after the General Election.

The release of these latest images follows an earlier appeal on Tuesday 19th May to identify eight other people.

That appeal yielded a number of leads; no arrests have been made in relation to them at this stage.

During the disorder on Saturday, 9 May, a total of 15 people were arrested near to Downing Street – 12 on suspicion of violent disorder and three for assault on police.

All were bailed pending further enquiries.

One officer was treated at hospital for a suspected dislocated shoulder.

A member of police staff also received hospital treatment for a cut lip after being struck by an object.

Three other officers were assaulted but did not require hospital treatment.

There were no reported injuries to any members of the public.

Police were aware of potential protests and a number of small groups were monitored on Saturday afternoon as they moved around the Westminster area.

At approximately 4 pm  officers began to deal with a protest outside Downing Street.

During the course of the evening the protest in Downing Street became larger.

A number of protesters began to engage in violent disorder and in a quick response to this escalation, at 18:17hrs a containment was put in place to prevent any further breach of the peace.

A number of officers were injured during the disorder and the Women in World War II Memorial was damaged with graffiti. I’m urging anyone who recognises these men to come forward and assist us with our investigation.

Anyone who recognises the individuals pictured or has any information is asked to contact the Public Order Investigation Unit on 020 8246 0076 or email them at IDsought@met.police.uk quoting the reference on the picture. To remain anonymous please call Crimestoppers on 0800 555 111.