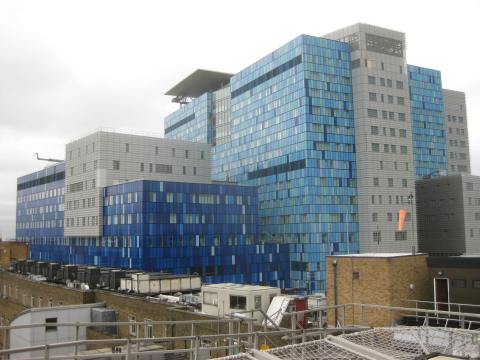 “Royal London Hospital redevelopment” by Matt From London – http://www.flickr.com/photos/londonmatt/3572775139/. Licensed under CC BY 2.0 via Wikimedia Commons –

Royal London Hospital and Newham University Hospital have been rated ‘inadequate’ by the Care Quality Commission.

This follows the CQC’s damning review of the already under-fire Whipps Cross University Hospital in March.

The Barts Health NHS Trust which manages all three hospitals and is the largest in England continues to remain in ‘special measures.’

The CQC said that during its latest inspections it found patient safety was not given sufficient priority and there was a culture of blame amongst staff.

Low staffing levels in some areas meant they did not provide consistently safe care, and bed occupancy was so high that patients were not always cared for on the appropriate wards.

Some patients also faced delays of more than 18 weeks from referral to treatment and had their surgery cancelled on several occasions due to a lack of beds.

The CQC said it has identified 65 areas where the trust must make improvements.

Barts Health NHS Trust is the largest NHS trust in England, serving a population of well over two million people, and home to some world-renowned specialities. So it is all the more disappointing to report the extent and level of our concerns in all three hospitals, particularly in safety and leadership.

It is clear that the leadership issues we found at Whipps Cross were replicated at the other hospitals. It is three years since the merger which formed the trust – but there is still a lack of engagement with the staff, low morale, high levels of stress, even confusion among the workforce about who is in charge.

Across the trust there is too little attention paid to safety, with failures in incident reporting and auditing, and in dealing with or learning from complaints. It is worrying that the trust’s directors didn’t seem to have confidence in their own data – a basic requirement in assessing their performance. It is all the more of a concern with waiting times which were so long, or that operations were being cancelled.

Although patient outcomes are at or better than the national average across most medical and surgical specialties at both hospitals, the reports highlight a number of areas where improvements are required, providing an overall rating of ‘inadequate’ for each hospital.

The CQC has also published its Quality Report for Barts Health NHS Trust and rates the Trust ‘inadequate’ overall.

The CQC found that generally patients and relatives at The Royal London Hospital felt they received a good standard of care. Operational challenges are continuing to affect patient flow, waiting times and discharges and these concerns are reflected in the CQC report.

The Trust has appointed a highly experienced managing director and medical director for The Royal London Hospital to strengthen the day-to-day running of the hospital.

The CQC notes The Royal London as being a pioneer in trauma care. Twenty-five percent of patients attending the trauma service have knife wounds or similar which is significantly higher than any other UK trauma centre.

However, the survival rate at the hospital is approximately twice the national average. The CQC also highlighted outstanding practice in stroke care and rates critical care as good across the board.

Key areas for improvement highlighted by the CQC include:

Care at Newham University Hospital is rated as ‘good’ and the CQC says care is delivered by hospital staff with compassion, privacy and dignity.

Despite ongoing challenges across the NHS, urgent and emergency care services are also rated as ‘good’ with the four-hour waiting time target consistently being met.

The Gateway Surgical Centre is cited as an example of outstanding practice.

However, the CQC rates the hospital as inadequate in the safe and well-led domains.

Steps have already been taken to strengthen local leadership at Newham with the appointments of a new managing director and a new medical director.

Key areas for improvement highlighted by the CQC include: