Police, who were appealing for help in tracing an autistic man, Taffazul Hoque, have announced he has now been found.

He was missing from Kensington and Chelsea.

He had been admitted to a hospital in Essex, but is believed to be in good health.

Met Police say: ‘We thank media and the public for assistance with appeals.’

Police in Kensington and Chelsea, and the family of a missing vulnerable autistic man with epilepsy are asking the public’s help to find him.

He’s now not taken more than five doses of his epilepsy medication putting him at serious risk of a seizure.

His loved ones are ‘increasingly concerned for his safety and well-being.’

He went missing on Friday afternoon, 22nd May.

Officers and his family are further concerned that whilst Taffazul is 38 years old, he server learning difficulties mean he may not be aware of his need for the medication.

Since Friday there have been several sightings of Taffazul; on a route 266 bus out of Hammersmith at 6.15 pm that evening, 22nd May; later at around 9 pm at Brent Cross Shopping Centre; and then at around 2 am the following day, Saturday 23rd May at a Dominos Pizza store in central Hendon.

When he went missing he had a small amount of cash on him, but no other means of travel such as an Oyster or travel card.

We, and Taffazul’s family, are exceedingly concerned for his health. The longer he is missing the greater the chance of him having a seizure that could seriously hurt him, and we fear his vulnerability is hindering him seeking any help or assistance.

We are appealing for anyone who sees Taffazul to contact us as immediately. Or, if anyone has seen him, or thinks they have seen him, to also contact us.

From the sightings we’ve had so far, we know that he is capable of using public transport so could be anywhere in the capital. He has previously been known to travel as far as Heathrow and Reading.

We also know that Taffazul likes to collect leaflets, catalogues and lottery tickets and are urging businesses in London to be on the look out for him if you have such items in your shops and stores.

He also likes to frequent markets and other busy places, but can become emotional and upset when approached by strangers. 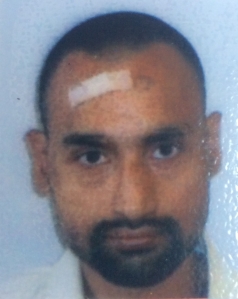 Taffazul, also known a Taff or Bia, went missing at around 16:00hrs on Friday, 22 May when he got off a bus at Shepherds Bush Green and headed towards Uxbridge Road. He was then seen on CCTV to enter Shepherds Bush Market.

He is an Asian man described as having short cropped hair and was last seen wearing a beige jacket, blue jeans and white trainers. He also has scarring above his nose and had a plaster on his forehead.

On Saturday, 23 May officers released CCTV images of him captured in Uxbridge Road, Shepherds Bush in those clothes.

Anyone who can assist police in locating Taffazul is urged to call Kensington and Chelsea police via 101.