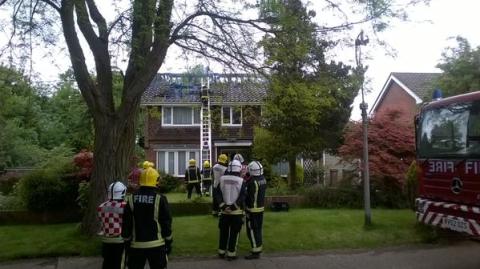 Cannabis factory in the roof on fire in Cheam. Image: @LondonFire

The London Fire Brigade have revealed how on Sunday afternoon their crews were called to a fire in a house being used to cultivate cannabis on Cuddington Way in Cheam.

Fire investigators believe the blaze was caused by the failure of electrical equipment in the roof which was being used in the cultivation of the plants.

The house’s electricity metre had also been by-passed.

The blaze destroyed the roof of the detached property and left part of it’s first floor badly damaged.

London Fire Brigade firefighters use ladder platform to tackle cannabis factory in the roof of a house in Cheam. Image: @LondonFire

The Brigade was called at 3.52 pm after UK power network engineers, who saw smoke coming from ‎the roof, raised the alarm.

Four fire engines and around 20 firefighters from Sutton and Wallington fire stations, as well as an aerial ladder platform from Wimbledon attended the scene.

Station Manager Kevin Mckenzie, who was at the scene, said:

Our crews worked really quickly to stop this fire from spreading to neighbouring properties or further damaging the house itself and thankfully there were no injuries.

Cannabis factory fires can be very severe because of the way criminals use unsafe wiring to illegally obtain electricity in order to grow the plants.

They’re often in top floors or lofts which means when a fire takes hold it spreads, destroying roofs and damaging neighbouring buildings.

Firefighters can also be exposed to risks when dealing with the fires because of bad wiring and booby traps at some of the properties.

The LFB says it’s important that people know the key signs and inform the police so that they can act swiftly to prevent these dangerous fires: