One man treated for burns in serious café fire on Fulham High Street.

Eight fire engines and around 60 firefighters and officers have fought a blaze in a café on Fulham High Street, SW6 this afternoon.

The fire affected the ground and first floors of the premises.

The cafe’s ducting – the extraction system – between the building’s ground and second floors was also involved in the fire.

One man has been treated by the London Ambulance Service for burns. 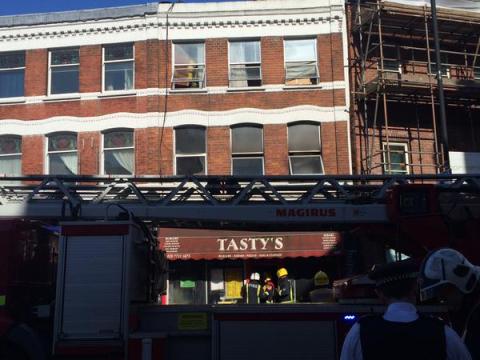 Damping down at fire in Fulham High Street. Image: @LondonFire

The cause of the fire is not known at this stage.

Heavy traffic around #Fulham High St as we deal with a café blaze. Please avoid the area if possible © @richdean21 http://t.co/m6kBUiYUhf

#Fulham: We are currently treating a patient with burns from the fire | @LAS_HART @LondonFire

Fulham High Street shut both ways due to a fire. Use other routes and expect delays. Thank you @OneAngus

@GetWestLondon London firefighters on the scene at a blaze in Fulham High street http://t.co/OvmQUwoaAq

Four fire engines and around 20 firefighters are currently dealing with a fire in a café on #Fulham High Street. http://t.co/8xH4SL9YAv

The view up Fulham High Street after the fire. Thanks to @LondonFire for keeping us safe http://t.co/lXeJUsqWbJ