A few hundred activists gathered on the bridge yesterday to create a large yellow painted banner with the words ’12bn CUTS. £120BN TAX DODGED. AUSTERITY IS A LIE.’ 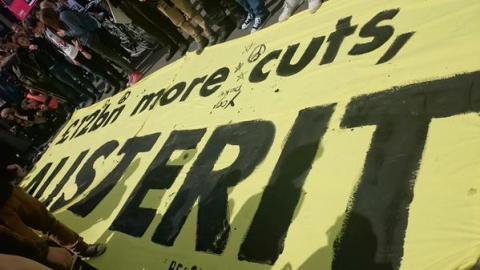 UK Uncut banner painted and created on Westminster Bridge and about to be hung. Image:@UKuncut

This was then hung on the side of the bridge facing out on the River Thames towards the City of London.

At the same time coloured smoke bombs created images captured by mainstream media and generating news and feature coverage throughout the world.

Demonstrators hold smoke canisters during a protest in London against austerity measures. #Photo by @niklashallen http://t.co/ORpyyEG8ni

Although traffic entering and leaving Westminster Bridge was brought to a standstill, the Metropolitan Police said there were no arrests and the event was regarded as a peaceful protest.

It sets out a political philosophy of ‘direct action’ to halt the fiscal austerity plans of the new Conservative government:

The cuts of the last five years have devastated people’s lives and are destroying our society. And they’re about to get much, much worse. The ruthless millionaires in charge are planning to cut another £12 billion, on top of the £25 billion they’ve already cut. We need to fight back with all of our energy, creativity and courage, to defend our public services and bring down the architects of austerity.

We can’t stop this by asking nicely. If we want to win the fight – and we can win – then we must make it impossible to ignore our arguments and our demands. We need to take direct action and build a powerful grassroots mass movement. We can create a different future – it doesn’t have to be this way – but we, the people, are going to have to create that for ourselves. Let’s bring together all the inspiring struggles and groups that have formed against the cuts and unite against austerity! It’s time to get organised, get creative and fight for our future.

Banner being hung off Westminster Bridge right now a collective effort by hundreds of people http://t.co/rKmATG17PE