Fire investigators believe a small fire in a Bishopsgate tower block in the early hours of Sunday morning was caused by ‘the careless disposal of a cigarette.’

Two hundred people left a restaurant area after the fire began on the 38th floor of the 46-storey building.

The fire was discovered by restaurant staff under the floor of an open-air terrace bar.

This was slightly damaged by the blaze.

The fire was put out by staff before the arrival of the Brigade.

A spokesman for the London Fire Brigade said:

We believe that the fire was caused by a carelessly discarded cigarette igniting dried leaves, both entering the void underneath the floor and via gaps around the edge of the paving slabs.

It’s absolutely vital you ensure your cigarette is completely out when you’ve finished smoking it.

This follows a similar warning from the London Fire Brigade at the end of May when part of a film and theatre scenery workshop was damaged by a fire believed to have been caused by a cigarette. 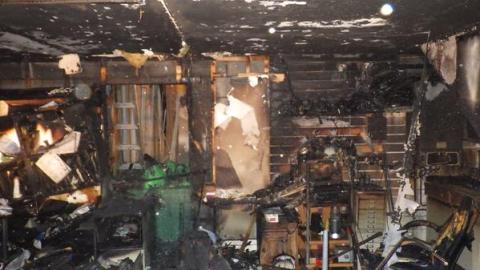 Damage to a scenery workshop in Peckham believed to have been caused by discarded cigarette. Image: @LondonFire

LFB said after the incident on 29th May:

Firefighters had to work very quickly to stop the fire spreading from the office to a large quantity wood stored inside the unit.

Fires caused by smoking materials – including cigarettes, roll-ups, cigars and pipe tobacco – result in more deaths than any other type of fire. Last year around three fires a day in London were linked to smoking and half of accidental fire deaths were related to careless disposal of cigarettes.

It’s absolutely vital you ensure your cigarette is completely out when you’ve finished smoking it. If you don’t, you risk causing a fire that could destroy not only your home, but also your life.