11.32 per cent more voters took part in the election compared to 2010 though the overall turn-out was still only 36.92 per cent of the electorate.

This was a rerun of a previous election declared void by an Election Court after complaints of electoral malpractice and corruption that saw the previous mayor Lutfur Rahman removed from office.

John Biggs is a Labour London Assembly member and won 32,754 votes on a second preference vote.

@johnbiggs4mayor has entered the building. Well done to all the @UKLabour Family from across London and beyond http://t.co/J3HmX0TK58

He had been runner-up last year to the Bangladeshi-born solicitor Lutfur Rahman.

But last year’s poll was marred by allegations of vote-rigging and voter intimidation.

An Election Court Commissioner had ruled there had been ‘corrupt and illegal practices.’

There was a strong police presence at polling stations throughout Tower Hamlets yesterday and at the London ExCel conference centre where the count took place.

Rabina Khan, a former member of Rahman’s Tower Hamlets First party, stood as an independent, and came second with 26,763 votes.

In contrast to the previous election when Mr Biggs had been smeared with false claims of being a racist, he paid tribute to the ‘by-and-large’ positive campaigns of other candidates.

What is important in Tower Hamlets is that we recognise the events of the past year or more have caused enormous tension and friction in our great borough and we need, under the new mayor, to pull things back together again.

Without dwelling too much on the past we should remind ourselves why we are in this position; there was bad behaviour. We need to overcome that, we need to move forwards, we need to recognise that Tower Hamlets is actually quite a magical place … where people come with traditionally quite little and build their dreams.

Problems with postal votes being assigned to empty flats, voter bribery and ‘dirty tricks’ were among claims made by members of several parties.

Scotland Yard said before the vote it was assessing 16 complaints of electoral malpractice.

#Breaking Labour's John Biggs has been elected mayor of Tower Hamlets in east London, replacing Lutfur Rahman who was removed in April.

Here are the results in the election for mayor in the east London borough of Tower Hamlets: 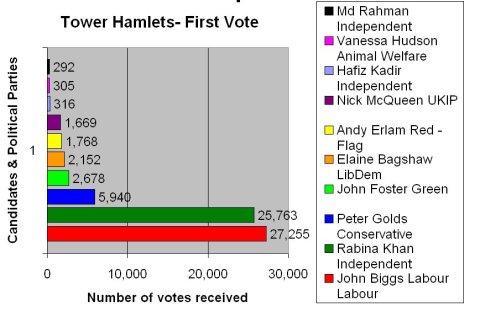 There was also a by-election in the Stepney Ward of Tower Hamlets council that was won by Labour candidate Sabina Akhtar with 1,643 votes and and 42.11 per cent of the poll.