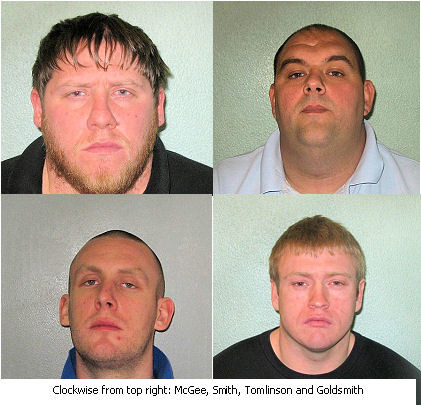 A gang who targeted and violently attacked a security guard delivering cash to HSBC bank on Baker Street, W1 have been jailed for conspiracy to commit robbery.

All four were sentenced at Blackfriars Crown Court on Friday, 12th June.

Two pleaded  guilty; the others were convicted by a jury.

‘Intelligence led’ meant they were waiting for them when they began their raid.

Unknown to the gang detectives were watching their every move.

At around 4:50 am on Friday, 3rd October 2014, a security guard delivering cash to HSBC bank on Baker Street was violently attacked.

Twenty minutes earlier the defendant Smith was observed by detectives completing a recce of the bank and the surrounding area.

Tomlinson had been lying in wait in a nearby phone box and waited until he saw the guard approach the bank before running from the phone booth.

He kicked the guard to the ground and took the cash box.

Despite being kicked and punch the guard only sustained minor injuries and did not require hospital treatment.

As Tomlinson fled across the street he was intercepted by detectives before he could reach Goldsmith who was waiting on a high powered motorbike.

Seeing that Tomlinson was being chased Goldsmith left without him, driving at speeds off around 80mph through the streets of London.

Officers were unable to stop him and he escaped.

Detectives were aware that there were two further individuals involved – Smith who had carried out the reconnaissance of the bank prior to the robbery – and the driver of a white van seen in the vicinity in the lead up to the incident.

Arrest enquires ensued and just 40 minutes after the robbery Goldsmith was observed leaving an address in St Mary’s Green N2 and was arrested.

Later that evening Smith was seen by detectives returning to his home address and was arrested.

With one individual still outstanding officers continued to make enquiries.

On Thursday, 9th October 2014 McGee was seen leaving an address in Sherling Way and was promptly arrested.

At the time of the offence McGee was entrusted with a van by his employer, which remained in his control over night.

This was the same van – which contained both McGee and Goldsmith – seen in the area prior to the robbery.

The defendants and their sentences

This was an audacious robbery concocted by four individuals who gave no thought to their victim.

Tomlinson subjected the security custodian to such a vicious attack that he stood little chance in defending himself.

I am pleased that the jury found Smith and McGee guilty for the part they played in the conspiracy and Goldsmith and Tomlinson had no choice but to plead guilty due to the overwhelming evidence put before the court. I hope that today’s conviction serves as a warning to those who insist on carrying out this type of crime.