A large fire in a block of shops on Yorkton Street, and affecting the Hackney Road generated plumes of smoke seen in many parts of London.

At the height of the blaze, ten fire engines and 72 firefighters and officers were attending the incident at a joinery business and workshop. 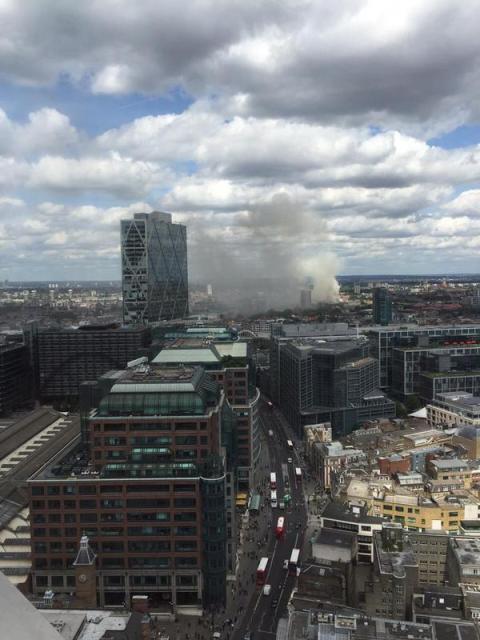 Plumes of smoke seen from miles around. Image: @LondonFire

One man’s been taken to hospital by the London Ambulance Service suffering from burns and smoke inhalation.

A member of the public spotted smoke and called the Brigade. On arrival crews wearing breathing apparatus helped three women and three men to leave the properties either side of the fire and two other people left the property before the Brigade arrived. The structure of the building has been seriously damaged by the blaze.

The Brigade was called just after 1 pm and it took nearly four and a half hours to bring the fire under control.

One person taken to hospital with smoke inhalation and burns. Image: @LAS_HART

Crews are expected to be at the scene for some time damping down.

The fire on Yorkton St #Hackney is now under control although crews will be there for some time damping down. http://t.co/o0emeq8d8U

Crews are currently working hard to contain a substantial fire in a row of shops in Hackney. http://t.co/jTeFrrzeMz

Further images of 72 firefighters tackling the blaze on Yorkton St in #Hackney http://t.co/TsJmvan0Ah

Witness at scene of the Hackney fire says "smoke was so thick you couldn't see out the window" bit.ly/1HJJjjj http://t.co/5sc5FuU4v9

Hackney Rd (E2) is now CLOSED both ways between Columbia Road and Queensbridge Road due to a building fire. Please seek another route.

@LondonFire brigade looks to be winning, the smoke is still wide-spread... http://t.co/ykgS6ZAKv5

#Hackney fire can be seen for miles. The blaze in a range of shops © @ForceofLearning london-fire.gov.uk/LatestIncident… http://t.co/fdC6TimEMP

We're fighting a fire in a range of shops on Yorkton Street in #Haggerston 10 fire engines at the scene http://t.co/aAjBmzU8cD

The fire at the joinery & workshop #ThisWeek in #Hackney is believed to be accidental london-fire.gov.uk/LatestIncident… http://t.co/BNWlBmT3Cv