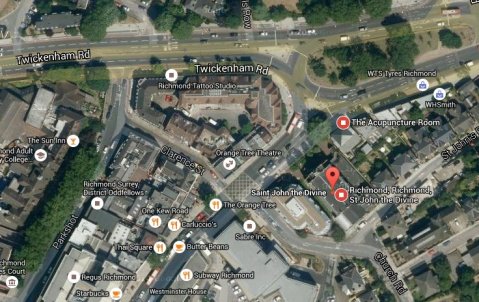 The body found on the roof of a business block in Richmond is believed to be that of a stowaway who plunged to his death from a plane flying into Heathrow airport.

Another stowaway who held on to survive the landing is critically ill in hospital.

The two men are believed to concealed themselves on a British Airways plane as it flew more than 8,000 miles from Johannesburg in South Africa.

Stowaway plunges to death from plane and lands on high street business: yhoo.it/1LjmhC4 by @kateferguson4 http://t.co/mZKmHO6D2y

The stowaway who died fell on to the roof of the business NotOnTheHighStreet.com in Kew Road, Richmond, south west London, yesterday morning 18th June.

Police and ambulance crews found the man dead at the scene at around 9.30am.

It is understood the second man, believed to be 24 years old, was found unconscious in the undercarriage of the plane at Heathrow around an hour earlier.

He was taken to a west London hospital where police said he is in a critical condition.

Reverend Neil Summers, from the St John the Divine of Richmond church opposite where the body was found told the Press Association he would lead prayers for the dead man:

It’s shocking, you do not expect these things to happen on your patch really. In one sense it’s not totally surprising as it’s happened before. It’s very shocking when it’s so close to you. We are going to say prayers for the people concerned tonight.

The Met Police said officers are investigating the death and whether the dead man is a stowaway.

The body is so far unidentified and inquiries are ongoing into this and how long it had been at the scene. No next of kin have yet been informed.

At this time there is no evidence to link the death to the discovery of a stowaway in the undercarriage of a plane at Heathrow Airport; however this is one line inquiry into identifying the deceased and the circumstances of his death.

The police say they have to treat the death as ‘unexplained.’

A post-mortem examination is scheduled to take place on Tuesday, 23rd June at Kingston Hospital.

The second man was originally in a serious condition, but police say this has now deteriorated and he is ‘critical.’

Heathrow officers believe they know the man’s identity, but are waiting for confirmation before releasing any details of his nationality.

We are working with the Metropolitan Police and the authorities in Johannesburg to establish the facts surrounding this very rare case.

NotOnTheHighStreet.com said in a statement:

The death is currently being treated as unexplained but early indications are that the body may be that of an airline stowaway.

Latest on investigation into a body found on a roof in #Richmond news.met.police.uk/news/body-on-r… http://t.co/WWL1LZy9Fz

In September 2012 26 year old Jose Matada died after falling from the undercarriage of a Heathrow-bound flight from Angola on to a quiet street in Mortlake, west London – a 10 minute drive away from this latest incident.

An inquest into his death heard the young man from Mozambique is believed to have survived freezing temperatures of up to minus 60C (minus 76F) for most of the 12-hour flight.